The fickle weather from yesterday gave way to clouds and sunshine in the morning. It was just another typical day at Torres del Paine. And then the murders began.

OK there was no murder but we were treated to the most intense rainbow show at breakfast.

Today we were hiking the French Valley to Mirador Valle Frances and if we had time and energy we would continue to Mirador Britanico at the end of the trail. The trail (the middle leg of the Dubya) is dominated by the glacier-filled Paine Grande Mountain on one side and the craggy peaks of Los Cuernos (horns) on the other. This section of the Dub circuit is considered to have the best scenery in the park. And it didn’t disappoint.

After leaving Refugio Cuernos we hiked along the lakeshore where we got whipped around a little by those pesky Patagonia winds, though it wasn’t as bad as yesterday. 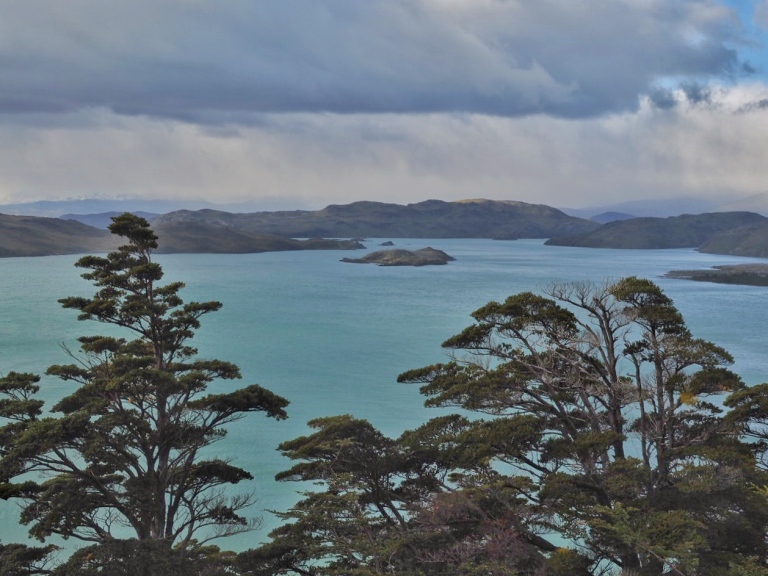 After 1.5 hours we reached Domos Francés (French domes) our accommodation for the night where we dropped off our heavy backpacks before continuing the hike up carrying only our daypacks.

We saw this bird on our way down to the reception area. We think it’s a Pray bird. 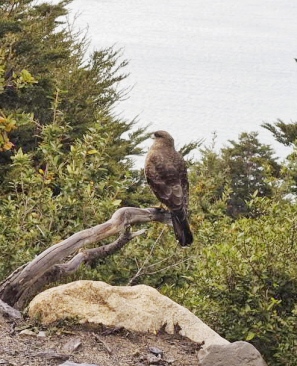 On the way up the valley we would get views of distant mountains and lakes plus occasional glimpses of the vast hanging French glacier that reigns over this landscape.

Eventually we reached Italiano Campsite, which looked like the storage room for REI with hundreds of backpacks scattered haphazardly around the grounds. Signs at the ranger station posted the cutoff times that hikers need to start hiking to reach their destination before trail access is closed. It was at this point that Sally ditched us so she could get to Mirador Britanico in time.

From here we made sluggish progress on fairly challenging terrain sidestepping large rocks and puddles.

The last part was a grueling climb up a moraine field that just got more difficult the higher we climbed. About 45 minutes later we finally reached the plateau of the Mirador Valle Frances. Once at the lookout we were rewarded with spectacular panoramic views of the backside of the Towers to our right and French glacier to our left.

Behind us the view of Lake Nordenskjold 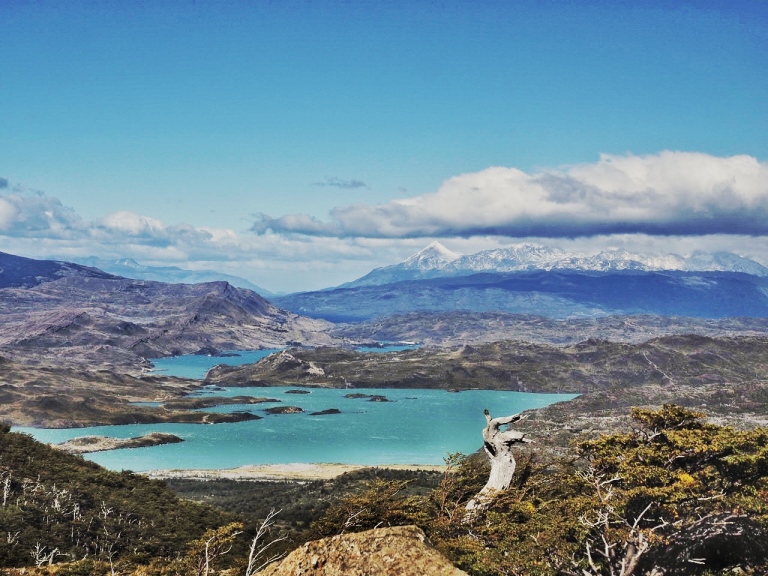 Out on the mirador we were once again battling the bitter cold Patagonia winds while we tried to take pictures and enjoy the views.

After admiring the scenery, we ate lunch huddled behind a boulder to shelter us from the unrelenting winds that blew the whole time we were there. We were interrupted by the loud rumblings of two avalanches sending white plumes of snow and ice showering down the mountain.

Completing the “Lowercase” of the W

There was no way we had time or energy to make it all the way to Mirador Britanico but we continued anyways hoping for more scenic views before we had to head back. 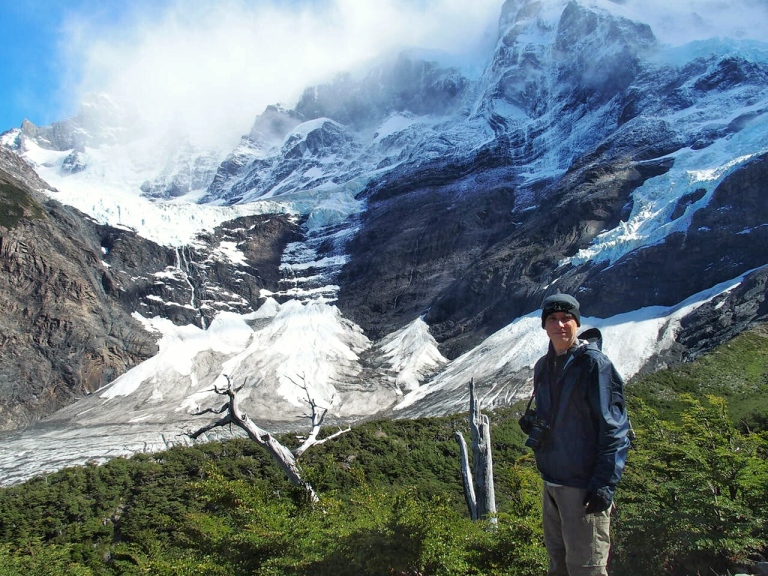 The trail was mostly through forest so we didn’t really see much more. About an hour in we decided to retrace our steps and head back.

It was a bit tricky navigating down the steep and rocky climb down and if it wasn’t for our poles we would definitely have tumbled down. Yikes! 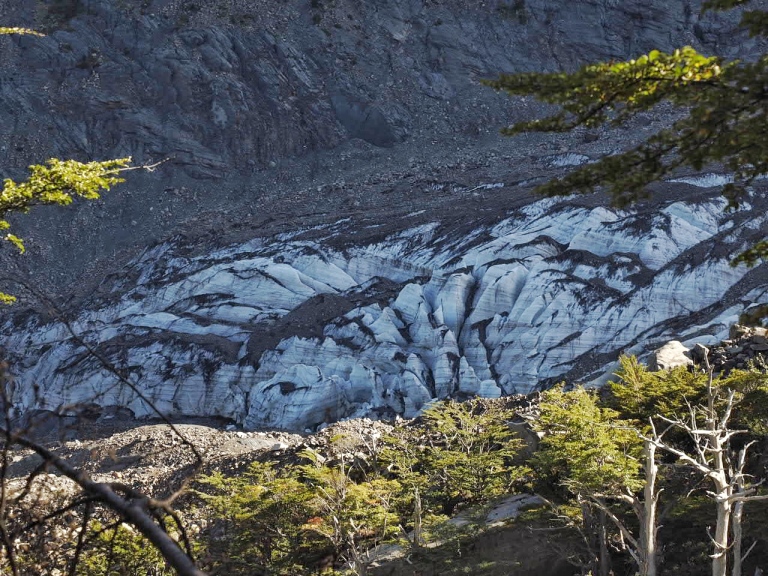 About 3/4 the way down the steep trail we just happened to turn around to see Sally gaining on us. Damn she was fast or we were really slow! After a quick greeting she went on her happy way leaving us behind again.

Afterwards we joked that Sally completed the “capital” of the W because she made it all the way to Mirador Britanico whereas G and D made it to Mirador Valle Frances or the “lowercase” of the W.

We were totally spent by the time we got back to the domes. Our bodies were starting to protest after three straight days of the W death march. According to G’s iphone app we went 10 miles and climbed 185 floors (more floors than the Dubai Towers). Geez no wonder we were tired.

Tomorrow is going to be our longest hike about 15 miles and if the weather trend we experienced so far is any indicator we can expect rain and wind.

Igloo style domes equipped with beds, bathrooms and electrical outlet, Domos Francés is located about half-way from Los Cuernos area and Italiano Campsite right on the shores of Lake Nordenskjold. Whereas most people stay overnight at Paine Grande after hiking the French Valley (additional 4km east) we chose to stay at Frances Dome to shorten the hike back from the French Valley.

The domes were surprisingly nice and roomy and configuration made it somewhat private. However our dome was really cold and there was little natural light coming in so it had a somewhat gloomy feel. Our bunks faced the entrance and away from the windows so that may have contributed to the atmosphere. Unfortunately the showers ran out of hot water. Sally managed to have a hot shower but G took an ice cold shower while D just decided not to shower at all.

Surprisingly dinner was not the usual beef and carbohydrates but Salmon. G & Sally thought the Salmon was cooked really well and enjoyed it very much. D, who has ichthyophobia, was fine with just the sides but the Refugio was generous enough to substitute the salmon for you guessed it beef.

The bedding were sleeping bags and unfortunately Sally got bitten again.