It was cold and miserable at the end of the Earth. We just landed in Ushuaia, the southernmost city of the Americas, cold winds were howling and low clouds covered the surrounding mountains making the city look bleak. Signs in town welcomed us to El Fin del Mundo but we weren’t sure if we wanted to be here. 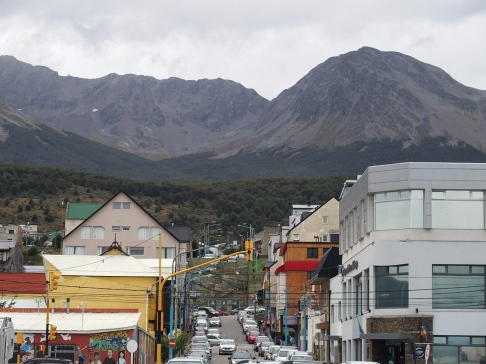 When we think of the end of the Earth we imagined fiery devastation or, if you play for the NBA, a sheer drop off a flat earth. Not you too Shaquille! In reality Tierra del Fuego is a cold blustery place with snowcapped mountains in the summer overrun with tourists wrapped up in hundreds of dollars worth of the latest high-tech, high-performance fabrics.

Ushuaia is the launching point for cruises to Antarctica so it’s no surprise that the town’s main thoroughfare is filled with plenty of restaurants and touristy shops filled with trinkets reminding us that we are at El Fin del Mundo. Along the costanera were a couple of casinos, a Malvinas war memorial (Pssst, just don’t call them by their F word), and a dock full of cruise ships and kioscos selling tours. 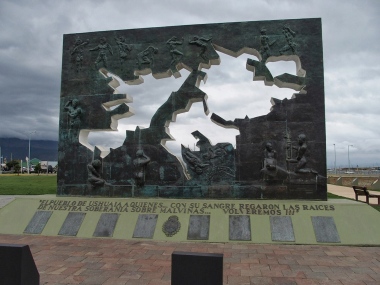 Our plan was to climb up to Cerro Guanaco in Tierra del Fuego National Park the next day. We still needed to get some conditioning in for that big W hike coming up in a week or so. Yikes! We showed up at the terminal to buy bus tickets from a guy milling around outside. He gave us a timetable of the bus return schedule to Ushuaia (so we don’t get stuck) and then pointed to a minibus which we boarded.

Once we reached park’s headquarters we were told that the overnight rains dropped snow at low enough levels to make the climb up to Cerro Guanaco difficult. With clouds covering all the peaks it didn’t seem we would get clear views of the surrounding mountains anyways. Instead we hiked the Hito XXIV trail that borders Lago Roca which eventually reaches the Chilean border. With the scenery not changing much we decided to turn back after doing half the trail. There’s D in her gore-tex, dri-fit, hitex frabric outfit looking miserable.

We stopped and had lunch at the Park’s headquarters cafeteria thankful for the warmth and shelter. The food was surprisingly very good considering in the states the national park food we had ranged from decent to inedible. After lunch we checked out some shorter trails near the headquarters. 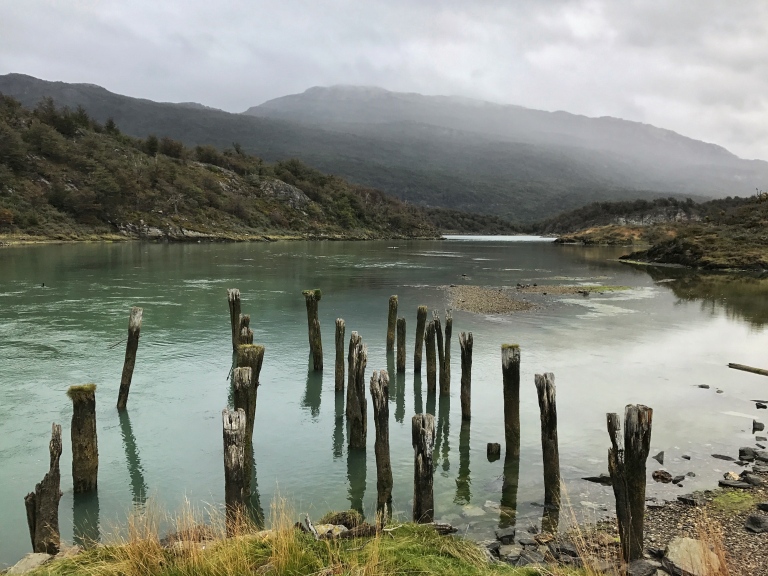 It started to rain so we decided to cut short our hike and catch a bus back to town. During the bus ride back we asked the driver if Ushuaia is always this cold and she said she remembered as a kid that there used to be more wintry days. Now she sees more sunny warm days which she attributes to global warming. Who would better know the impact of climate change than someone who lived in this part of the world all her life? She then said it was our (the US) fault. We blamed China. As we headed back the clouds began lifting and we were finally able to see the snowy peaks in the park and in Ushuaia.

Voyage on the Beagle Channel

The main reason we traveled to Tierra del Fuego was to cruise along the Beagle Channel, so called because Darwin’s ship sailed through here, and see Magellanic penguins. Several companies offer tours of both but Piratour is the only company that has a permit to land on the island where the colony is located and walk among the penguins. All other companies can only view the penguins from the deck of their boat.

Our tour began with a 2 1/2 hour drive to Estancia Harberton, a privately owned reserve with a whale and dolphin museum and the launch point for boats to the penguin colony. The museum, Museo Acatushun, had a pretty extensive collection of whale, dolphin, seal and penguin skeletons found along the shores of the estancia. It’s also a research station with resident scientists doing dissertations.

The quick boat to the penguin colony on Isla Martillo landed us among some of the Magellanic penguins. 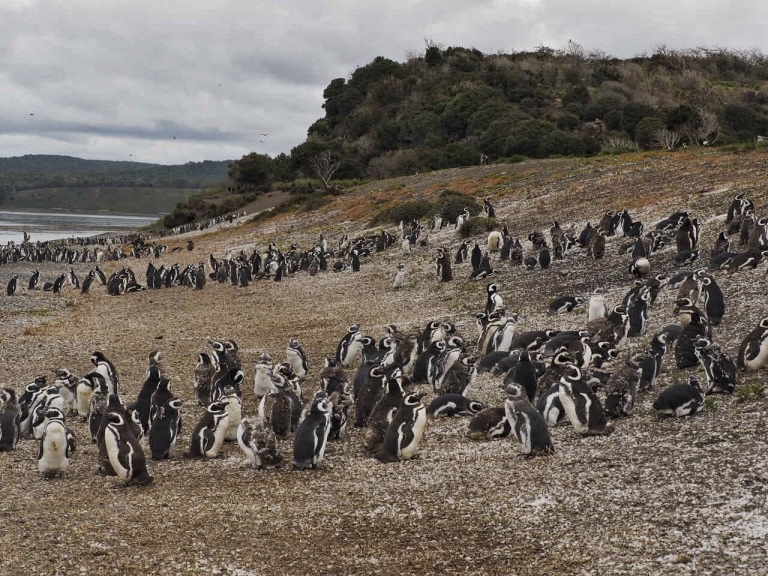 Most of the colony had migrated north but a good number of still molting adults and chicks were around. 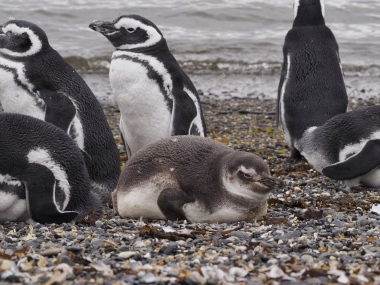 We were restricted to certain areas but we still had to walk around penguins to get out of their way. 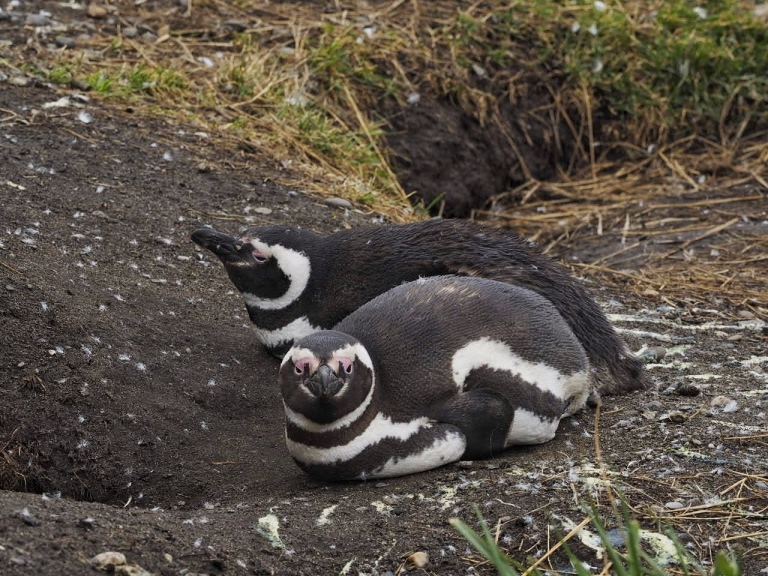 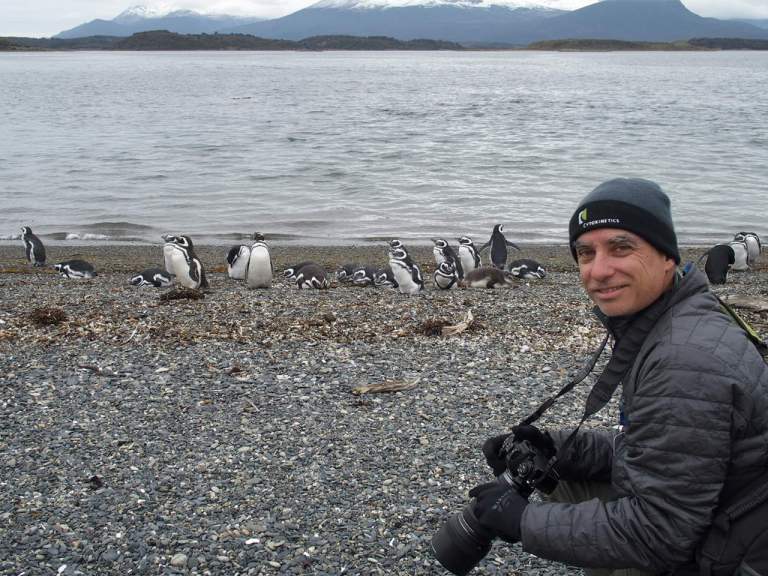 Of course there were a few asshole tourists behaving badly and ignored the guide’s instructions to stick together and keep a distance from the penguins. At one point the guide had to go over and pull these tourists away as some penguins were becoming distressed. If people can’t respect the rules I would rather have the company shut down this tour. It’s a privilage to be this close to these magnificent birds and not a right.

A walk further along the shore brought us to the smaller colony of Papua/Gentoo penguins, the only colony in South America. They were really cool looking and much bigger than the Magellanics. 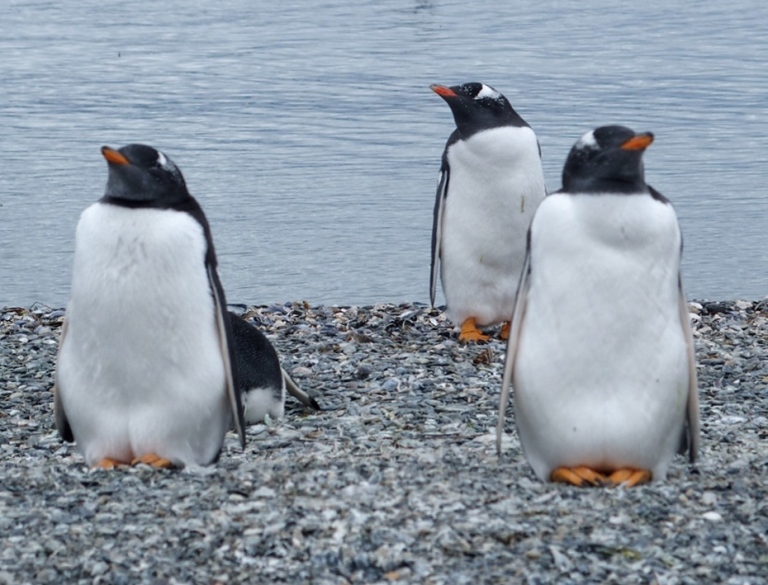 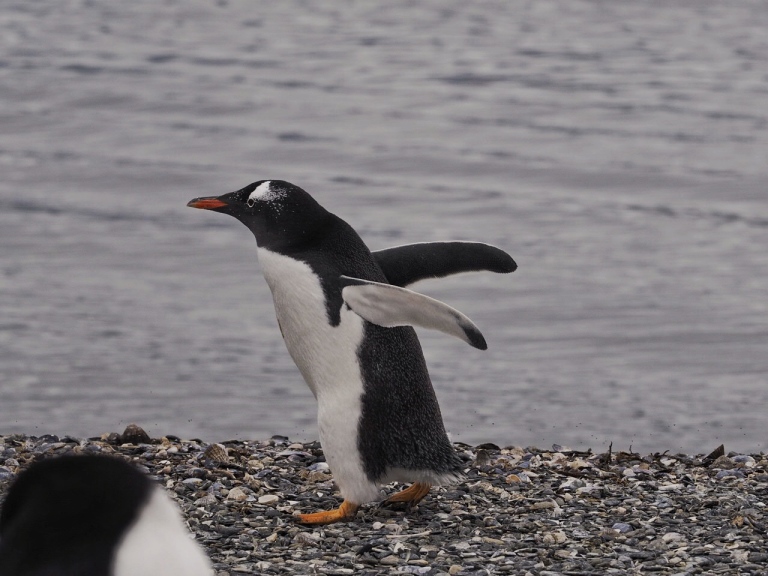 A couple of non-penguin birds.  What are they doing here?

We got back to the museum and boarded the waiting yacht for the Beagle Channel cruise. 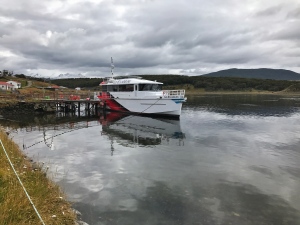 By this point the skies were a mix of clouds and sun with most of the mountain peaks visible. We started out inside but decided to brave the cold wind on the top deck.

Most of the views were of the surrounding mountains until we reached some rocky islands in the channel near Ushuaia. 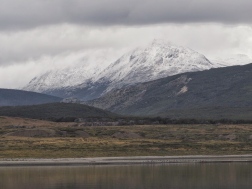 The first islands contained a shag colony with hundreds of the cormorant relatives.

Soon after we reached the island with the iconic red and white Les Eclaireurs lighthouse. The captain made sure we passed slowly and had the Martial Mountains in the background. 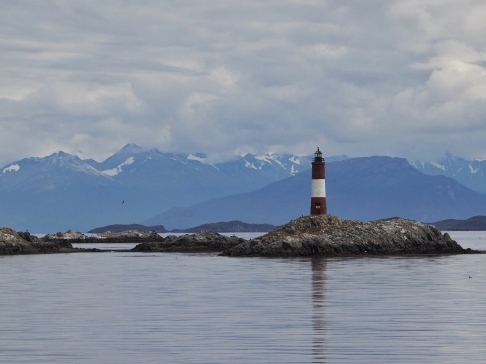 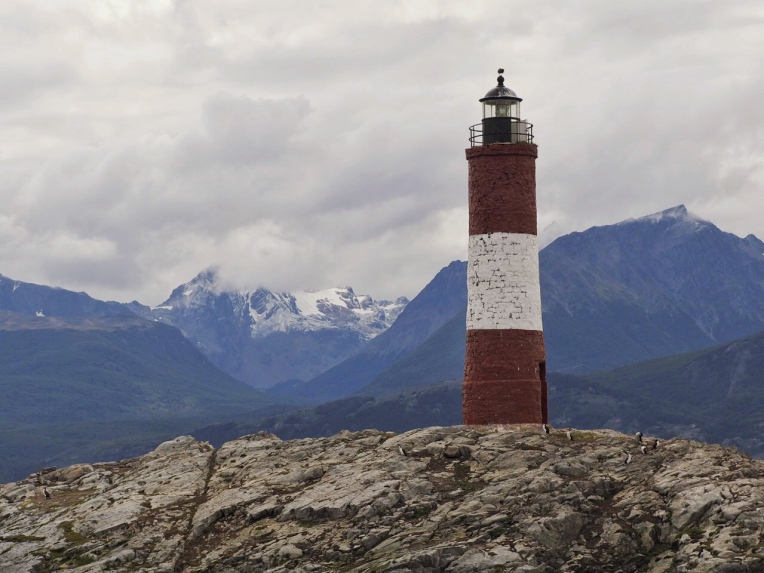 After that we came upon a sea lion colony. The captain lingered for a while to make sure we enjoyed the activity below.

Overall a good day and we didn’t even fall off the end of the earth.

We tried to contact Pira Tours either by phone or email for days but got no response. Our host at Hotel Austral got them on one try and secured tickets for us on the most “promising” weather day. They are the only operator that conduct walking tours with the penguins. The group is limited to 25 a visit so space sells out fast. We had 50 in our group so the group was broken into two to keep within the size limit. One group would visit the museum while the other went to the island. Once that group returned from the island the other group was allowed to go.

My only real gripe is that guide should have been firmer with the tourists who weren’t following the rules. They need to be strict about this because once you allow someone to break the rules others will follow suit.

Great hotel about 2 blocks from the center of town and 5 minute walk to the bus station.  The place was welcoming and cozy which was nice during the cold blustery days to have a warm haven to come back to.  Rooms were big and comfy. 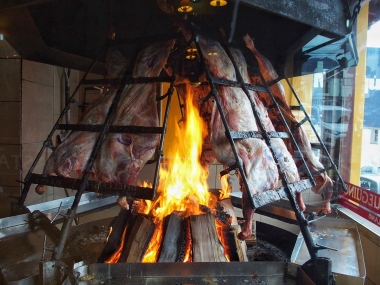 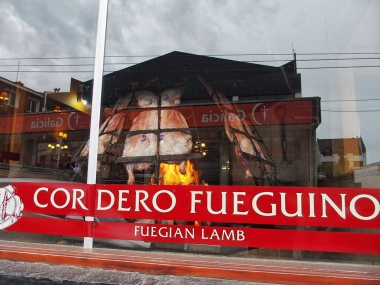 We didn’t eat here but thought the sign was funny.