Argentina has two major highways running north-south, one along the east coast and one along the Andes in the west. Mythical RN40 or Ruta 40 is in the west and passes through many of Argentina’s signature regions including wine country, the Lakes District, and the dramatic peaks and glaciers of the southern Andes. Traveling along it was on our wish list but at more than 5000 km we obviously couldn’t take on the whole thing without hugely extending our trip. For now at least, we were somewhere around its midpoint in Bariloche with a car and time to kill. Why not explore more of its Lake District sites and towns?

About a four hour drive south is the town of Esquel, a former Welsh settlement that has a distinctly small town feel with no sign of Swiss ski resort culture. The town itself is unremarkable but its main draw is its proximity to Los Alerces National Park. As usual we managed to travel on a weekend, leaving us there on a Sunday. The only eateries open anywhere near the center of town were a crowded restaurant (naturally since they’re the only place open) called Maria Castana and a couple of ice cream shops. Service was slow enough that lunch became dinner.

The next morning we tried to get an early start to visit the park. D had to drive as G’s back was bothering him from using the manual clutch. After driving for 5 miles we realized we forgot to get gas so we had to turn back to town to fill up as there were no signs of a gas station in the horizon. It was around 11am before we started again for the park. So much for the early start.

Parque Nacional Los Alerces was established to protect the alerce trees, among the oldest tree species in the world. The park has a main road that links north and south entrances and meanders along a series of lakes. We entered through the nearby south entrance and got the lay of the land from the rangers.

There weren’t places to pull off and enjoy the scenery. At one point we reached a bridge where cars were parked on the side of the road and we decided to investigate just because we hadn’t stopped anywhere yet. It turned out to be a waterfall guarded by a cat. That just made the pretty scenery more cute. 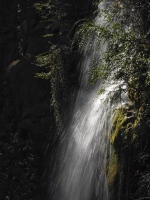 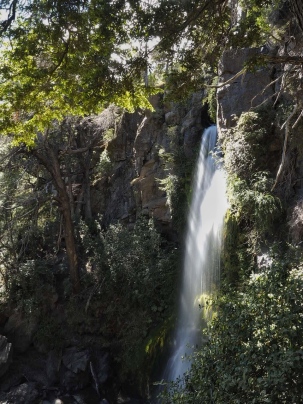 Cat on the platform. Not sure if someone left him here.

After that it was more driving through the park, illegally pulling off to enjoy these views.

We stopped once we reached the main part of the park around Lago Verde. We had to pay for parking but that’s where the most interesting trail began. We hiked about 1 km on the wrong trail before doubling back and finding the correct one at the other end of the lot. From then on it was smooth sailing. We crossed a suspension footbridge and walked the loop trail that covered two lakes and the river that linked them. 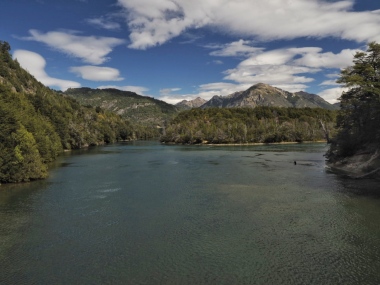 We had good views of Torrecillas glacier on the other side of Lago Menendez.

We exited out the north entrance and continued north to El Bolson. El Bolson is halfway between Bariloche and Esquel and is described as a hippie village. As we drove through town center we noticed that everyone seemed to be in the main park and that the weekend market was open on Monday.

When we walked through on the way to dinner a parade spontaneously formed led by drummers and people, some in costumes, dancing to the beat celebrating their version of Carnaval.

The next day it rained nonstop but we weren’t going to be denied one of the region’s coolest sights. A slow pothole-filled harrowing drive up a local mountain was followed by a steep, wet hike to the Bosque Tallado.

This is a spot in the forest where dead trees were carved into standing sculptures by local artists. You can also get great views of El Bolson from here, but due to rain and low clouds we were denied.

A trail wound around and contained the sculptures and plaques describing them. Unusual and very cool. 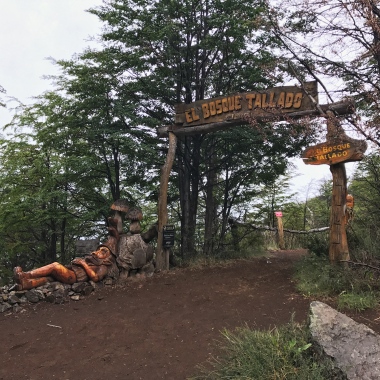 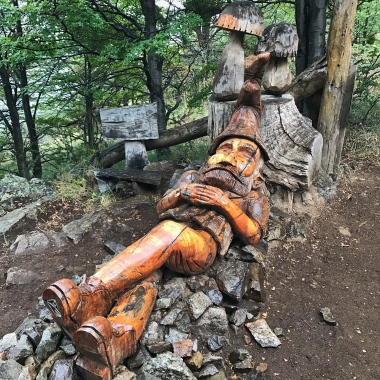 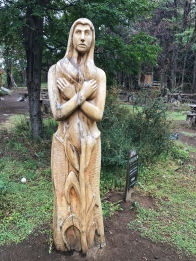 After visiting the sculpture gardens, we stopped to eat the best empanadas on the planet. They make them to order and we ate them in the car. Yum!

Afterward we drove back into Bariloche for one more night and for one more dinner before flying out to Ushuaia the next morning. Dinner at Fonda del Tio turned out to be the best meal we had in Bariloche (after the much-loved empanadas) and were disappointed that we didn’t discover this place sooner.

In the morning, we were to meet a Damien at the departure terminal to return the car rental to him. We pulled up to the curb and a man, who we assumed was Damien met us at the curb, did a quick inspection then drove off. At least we hope that was Damien. It was one of the easiest car rental drop-offs we ever had.

Hard time finding accommodation due to Carnaval holiday. We managed to get one of the last rooms in El Bolson.

Nice newish hotel. Rooms were on the small side but clean. Bathroom sink on the outside. About 2km from center of town. Extensive breakfast. Free parking in back. Barking dogs at night.

Good solid hotel and reasonably priced for its location. Close to the center of town. Standard rooms.  More quiet than the B&B we stayed out further away.

One of the better meals we had since we left Buenos Aires. Food was simple but good.

Best empanadas ever!!! We ordered minced beef, Humita, chicken and chopped beef. If we could we would have just eaten these for the rest of our stay in Argentina.

Best meal in Bariloche. About 2km from the tourist center. A local favorite according to LP. Argentine comfort food. Based on what everyone around us was ordering it seems that the Milanese Napolitana is the dish to get with a side of french fries.