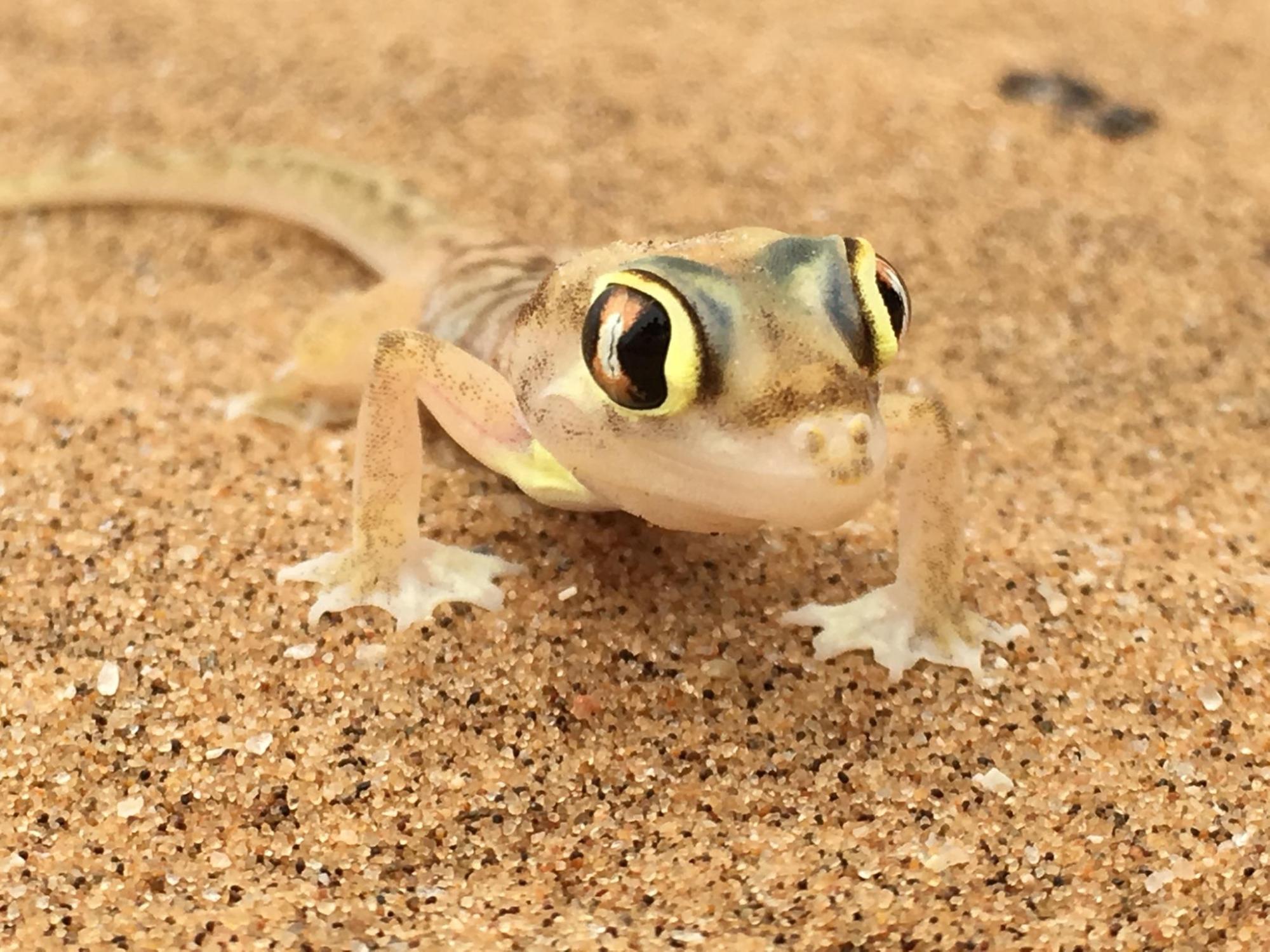 From the hot, dusty dry furnace of the Namib desert to the temperate climate of the Skeleton Coast, we were making our way to the Swakopmund, a town founded by German colonist. Shrouded in misty fog, Swakopmund reminded us of home but with the German tourists.

The drive to Swakopmund was pretty spectacular and in some places hazardous to anyone driving more than 30 kph. Mostly on gravel roads, the drive traversed stark desert, lumpy terrain of what looked like old pyroclastic flows, hills of thinly layered black and grey rock, a climb in and out of narrow gorge, and finally a never ending field of sand dunes up to the Atlantic Ocean.

On the way to Swakopmund

On the way to Swakopmund 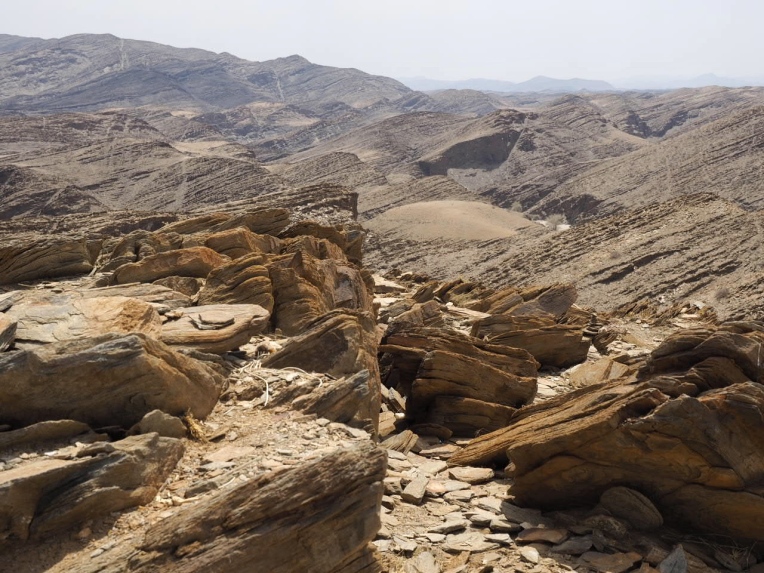 All the while Evil Jane kept plotting to get us lost as she directed us to dirt tracks that went off to nowhere trying to get us back onto a paved road. We finally got tired of Evil Jane, locked her into the glove compartment and outsourced our GPS directions to Google maps on an iPhone, now known as Good Jane.

When we reached Walvis Bay, a small industrial city about 30km south of Swakopmund that serves as the main ocean import/export point for Namibia and Botswana, we passed some wetlands filled with flamingos. When we stopped to take some pics they immediately took flight. It was cool to see the hues of pink against the grey misty skies.

At Walvis Bay is where we met our first freelance “parking attendant” when we stopped for lunch at The Raft. In Namibia and in South Africa they have a program where people can earn a living by watching over parked cars in exchange for tips. Those who are registered wear official reflective vests. Our guy offered to watch our truck while we ate but he didn’t have the official vest. What to do? We paid up of course.

Once we reached Swakopmund we had to attend to some Avis Fail business and headed to the Cymot store to have a new battery installed for the fridge. Once Titus confirmed our suspicion about the battery, we called Avis who then referred us to Cymot in Swakopmund. The fridge began humming as soon as the battery was connected. Avis Fail #4 problem solved…maybe.

The next morning we went on a Living Desert Adventures tour to explore the desert landscape of Dorob National Park and learn about the small creatures that live among its sand dunes. Chris, the owner and main guide, is an avid naturalist, photographer, surfer and overall master showman who gave the tour in English and German without skipping a beat.

While Chris gave an overview of the geology and formation of the desert, his co-guides, Grant and Doug, would scout around looking for the critters in the sand. First they pulled out a Fitzsimmon’s skink, a leg less lizard that lives just under the sand. He let us hold it and pass it around. 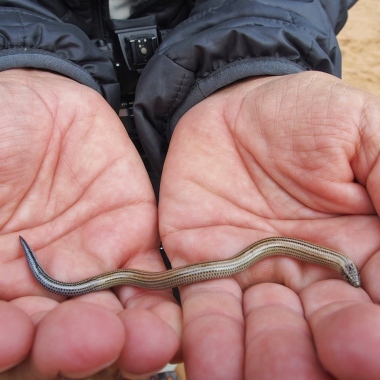 Next they found a Peringuey’s adder, a small poisonous snake that lies buried in the sand except for its eyes. He pointed at the exact spot it was hidden and we could not see it. He then borrowed Kim’s iPhone, took a close up picture and passed the phone around. It’s amazing that the guides even saw it.

He then got it out in the open and let us watch it sidewind across the sand and then re-bury itself. 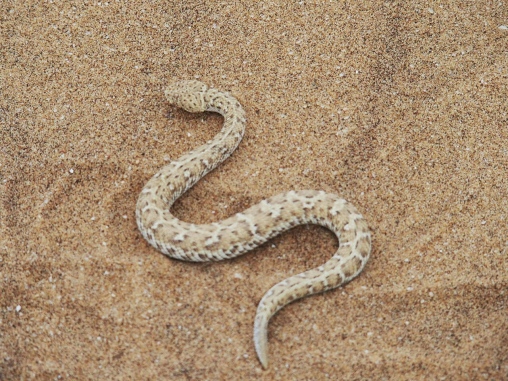 Next up he showed us a Namib Dune Gecko, the cutest, colorful translucent gecko. Again Chris used Kim’s iPhone and posed the gecko by lifting his head then took the shot from 1 inch away from its face. Kim was quickly making new friends from our group who wanted a copy of the pictures sent to them. We have to admit we fell in love with this little guy. 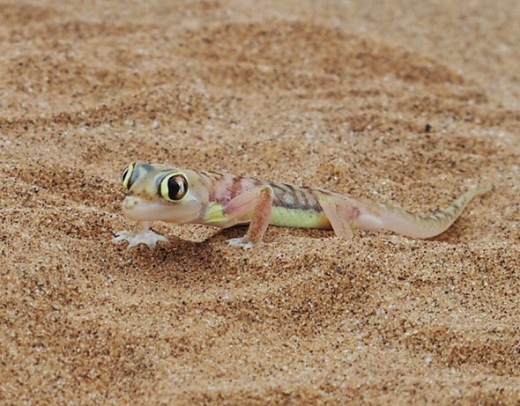 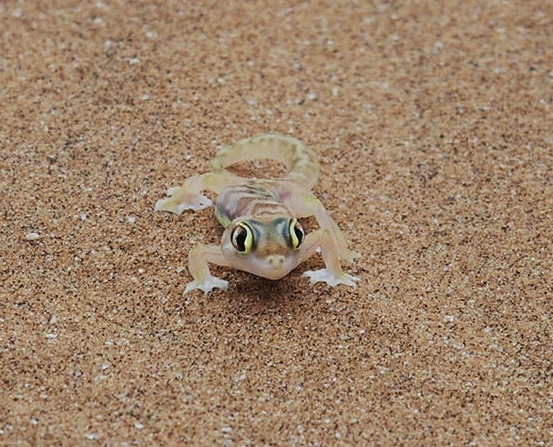 Chris was a bit more cautious with the dancing white lady spider. All three guides very carefully dug one up and then very carefully tried to get it to pose and dance for us. We kept a respectful distance as the spider is venomous. Guess which one was shot with the iPhone 6s? 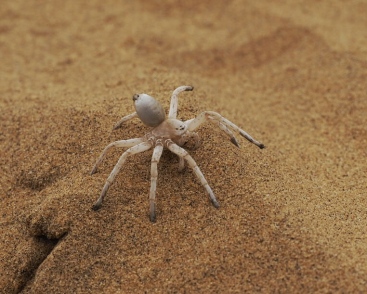 Not shot on iPhone 6s

Lastly they found a Namaqua Chameleon. Chris fed it a worm which it plucked with its tongue.

We then ended the tour with a dune drive riding over the dunes and exploring the landscape.  The tour was an unexpected surprise and delight. 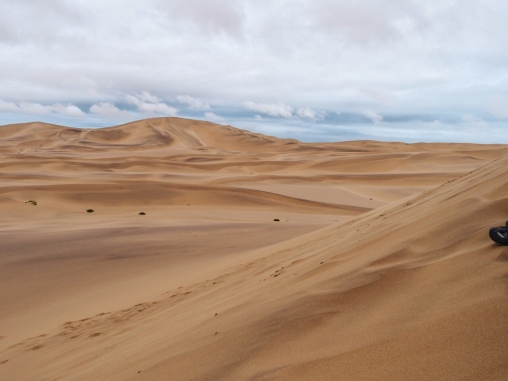 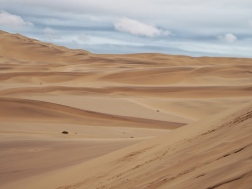 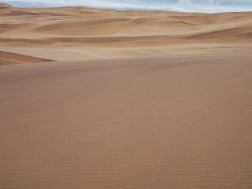 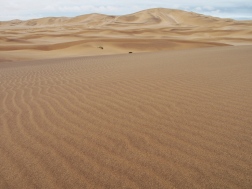 The lodge is situated at the edge of town facing the sand dunes that surround the city. It was yet another lodge that we would never booked. Every room has views of these vast sand dunes through picture windows. The really cool feature is the pivot hinge front door.  Look it up. 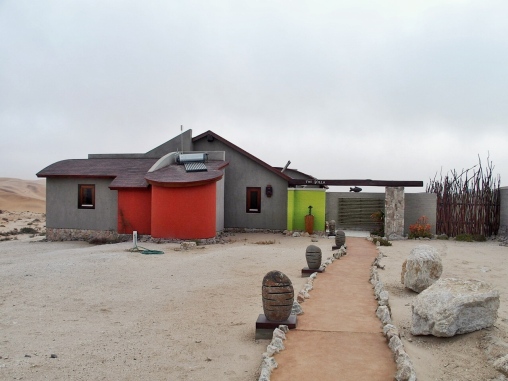 Seafood restaurant that also serves sushi. Good but not spectacular.