We flew from Kuching to Sandakan, picking up Colby and Bay along the way at Kota Kinabalu. They had just spent a cushy day at a posh resort and were in need of some exposure to rustic Southeast Asia. Of course the Sheraton Four Points in Sandakan was anything but rustic, but at least we left the hotel to get dinner at an outdoor eatery on the waterfront.

Next morning we were on a speed boat to Selingan Turtle Island, one of three islands that make up Turtle Islands National Marine Park where green and hawksbill turtles come on shore to lay their eggs. The park was established to protect the turtles and their nesting habitat. We were spending the night there to learn about the conservation programs and to witness turtles laying their eggs.

After an hour we arrived at the park and checked into our air conditioned bungalows that only had cold running salt water to shower. Nice…unless you discover it’s salt water the hard way. I think Sally is still rinsing her mouth.

All the turtle action happens at night so we spent most of our time at the beach, sunning ourselves while Bay, Colby & Sally went snorkeling. The first thing we noticed was the highly cratered sand from all the sea turtles that use the beach for nesting. The second was all the annoying sandflies that were attacking our feet.

There were huge monitor lizards about 3 foot long roaming around the park. One big lizard chased some others around trying to mate with them. Turns out they can run fast and climb trees.

It was unknown when we would see a turtle laying her eggs. It can be anytime and you are advised to not leave the dining area until then. About the time we were finishing dinner word came down that a turtle was laying eggs on the beach and was ready for viewing. We were told we were lucky that it was early. Yes there’s that word again. We hurried out and converged on the beach where a large green turtle was laying her eggs. The rangers scooped the eggs into a bucket as quickly as she dropped them, and when she was done she swept sand into the empty nest.   In total she laid 74 eggs.  We were allowed to surround her to witness and take pictures of the event.  Of course there were some people who had to take a selfie with the turtle while she was in labor. 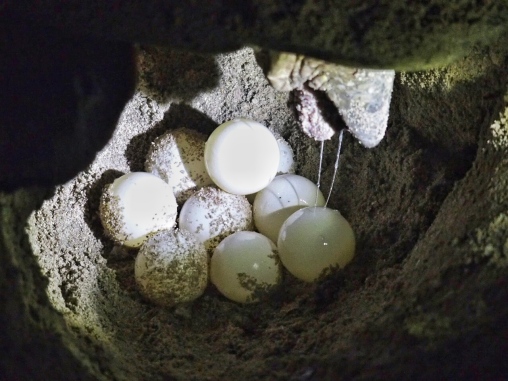 After the rangers measured and tagged her, we followed them to the shaded male hatching ground with their new bucket of eggs.  The rangers dug a hole, buried the eggs and labeled the spot with the date, species, and number of eggs. In two months there will be a new batch of male green sea turtles to release into the wild. 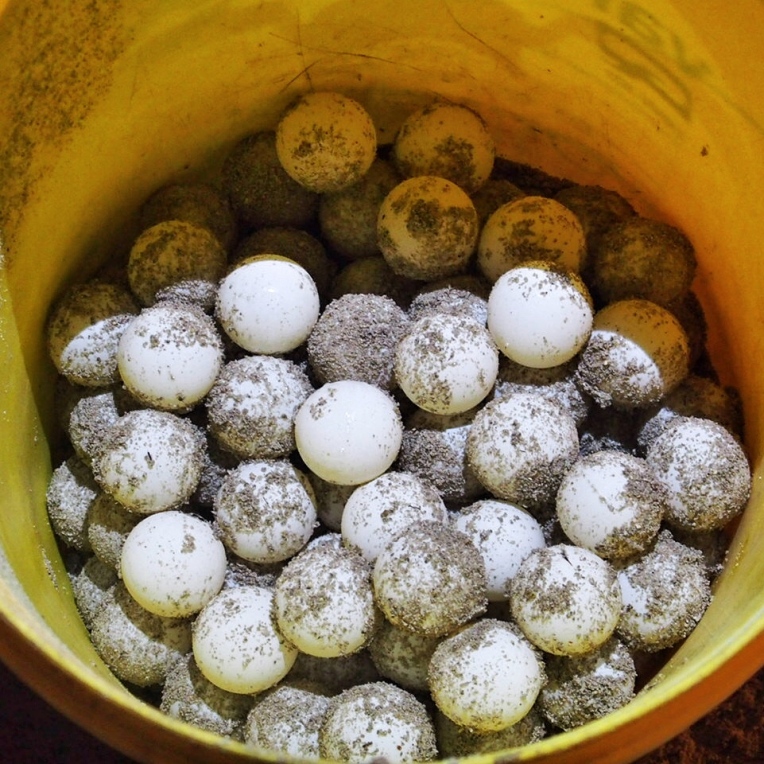 Eggs buried in the hatchery 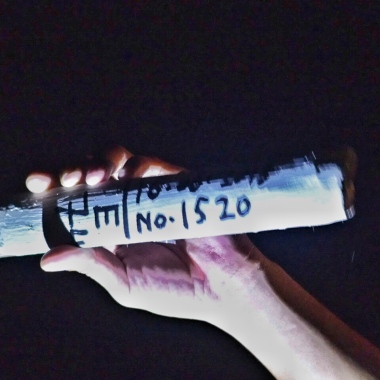 Finally, we followed the rangers to another section of beach and watched as they released a bunch of newly hatched babies 10 feet from the water and let them earn their freedom through the voracious army of tourists. The cuteness was off the charts. All the babies made it safely to the ocean and disappeared into an unknown future. 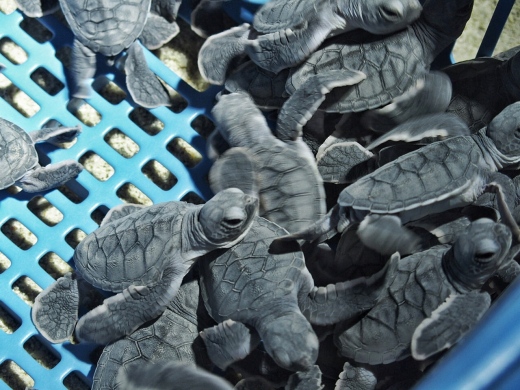 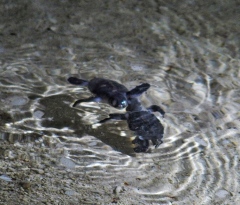 That night 35 green turtles and 1 hawksbill came on shore to lay their eggs.  There were 2,646 green turtles eggs and 124 hawksbill eggs laid plus 215 hatchlings released.  Overall a successful night for turtle conservation.

Sidenote:  We did notice a police presence at night and that is due to the troubles coming from the southern islands of the Phillipines.