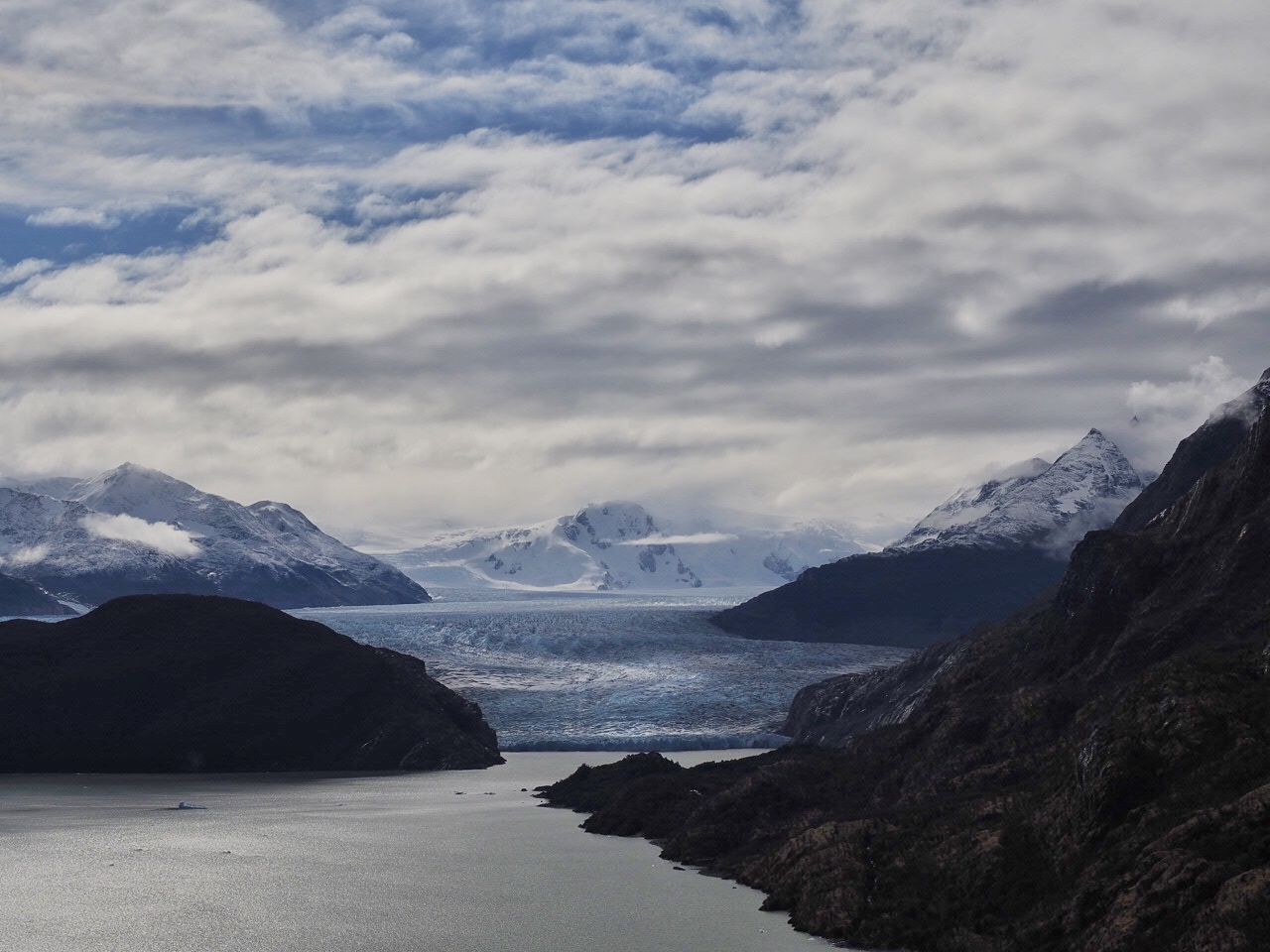 It was the final push. With the right side of the W behind us, we just had 14 miles to hike to claim we technically completed the W circuit. Our destination was Grey Glacier part of the Southern Patagonian Ice Field, the world’s second largest contiguous ice field outside of the poles.

We left Frances Domes in a cold drizzling rain with dark overcast skies that threatened much more. We climbed the steep hill out to the trail and retraced our steps to Italiano campground. Once we reached the campground we turned left, crossing a creaky suspension bridge, toward Lago Pehoe and Paine Grande Refugio.

The undulating trail went through a mixed terrain of brush and open grasslands before we came upon huge swaths of burnt forest, a terrible reminder of the fires that devastated this area back in 2005 and 2011. Both fires were caused by idiot tourists who were camping in unauthorized areas. The 2011 fire, which was caused by a tourist burning toilet paper, was so massive and destructive that open fires are now strictly prohibited in the park. 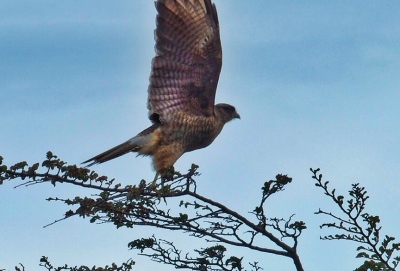 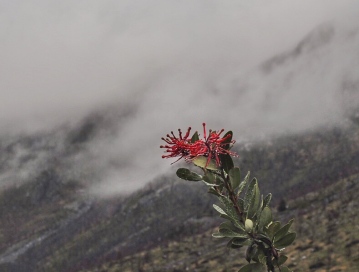 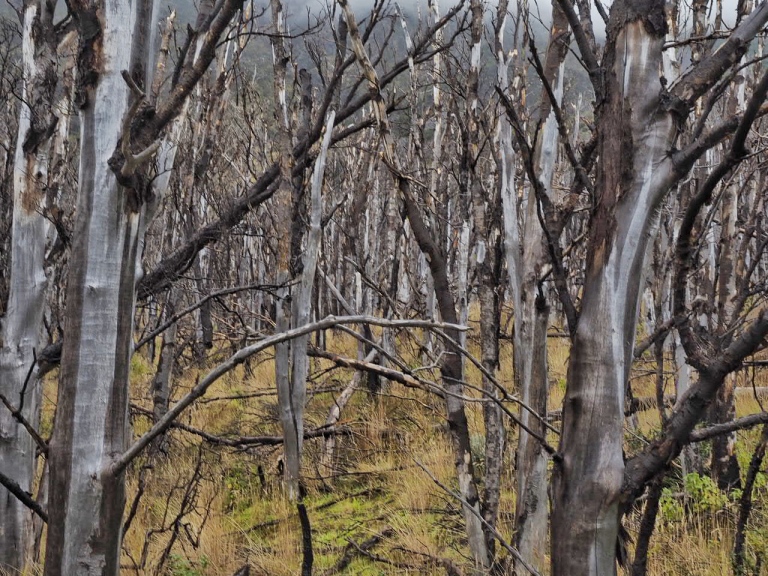 About 2 hours later we reached Paine Grande Refugio and stopped to use the facilities (both G & D experiencing some stomach problems) while Sally continued on the trial to find a more secluded, if not dry, spot to have lunch.

That’s when it really started to rain. Hard.

As we sprinted from one building to another, we stumbled upon a a public dining area filled with campers having lunch. We took refuge there and ate our lunch in warmth and comfort.

It was 1pm by the time we finished lunch and we still had another 11km or 7 miles to reach Grey Refugio. And it was still raining. On our way back to the trail, we spotted a family of Culpeos or Red Patagonia Foxes (look like a cross between foxes and coyotes) running through the campground looking for scraps.

The trail from Paine Grande started out flat through a valley along the banks of a river. We thought we would run into Sally but she was no where to be seen. 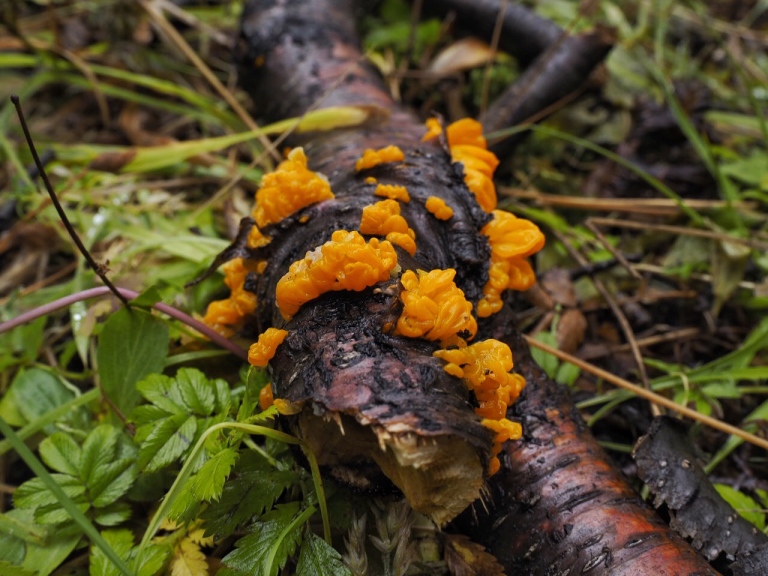 We continued on and finally caught up with Sally, an hour later, at Laguna Los Patos. It was at this point that Sally took pity on us and offered to take some weight off our backpacks. We unloaded a 2 inch thick paperback, a bag of toiletries, a tool kit and an iPad which added about 10 lbs to her weight. We hoped that the extra weight would slow Sally down but she just continued to hike at a marathon pace. Of course now we managed to keep up the rest of the way, following Lago Grey, up and down steep terrain, stopping often to admire the surrounding scenery and the bluest icebergs imaginable. 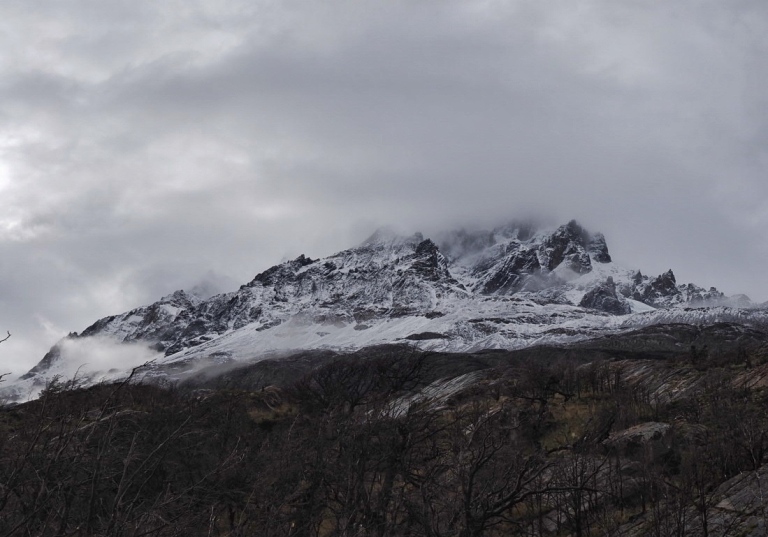 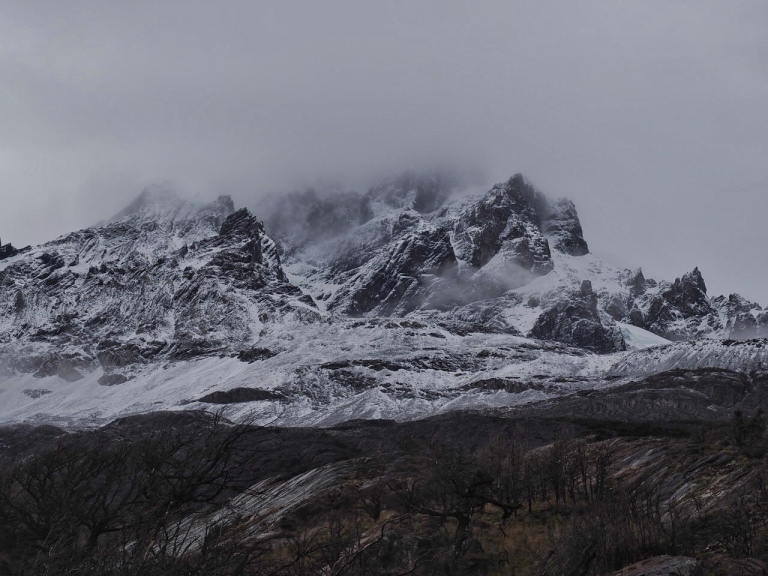 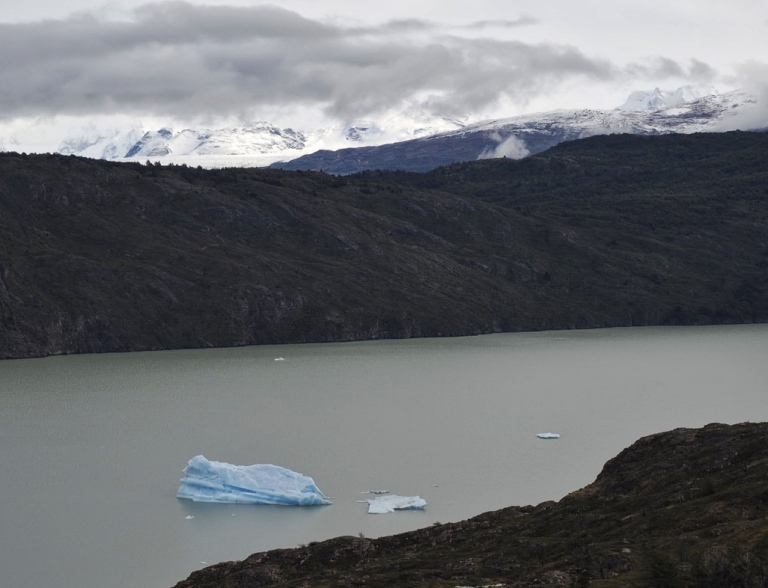 Along the way we bumped into the Australian couple from day 2 who were rushing back from the viewpoint to catch the late ferry. They looked exhausted as the woman commented how the “W hike almost killed me”.  After four straight days of marathon hiking we knew how she felt.

The trail culminated in a steep climb to a peak altitude of 850 feet and the most spectacular views of Grey Glacier. We were lucky as the clouds finally lifted, letting the sun peek out, giving us clear views of the glacier and ice field beyond. 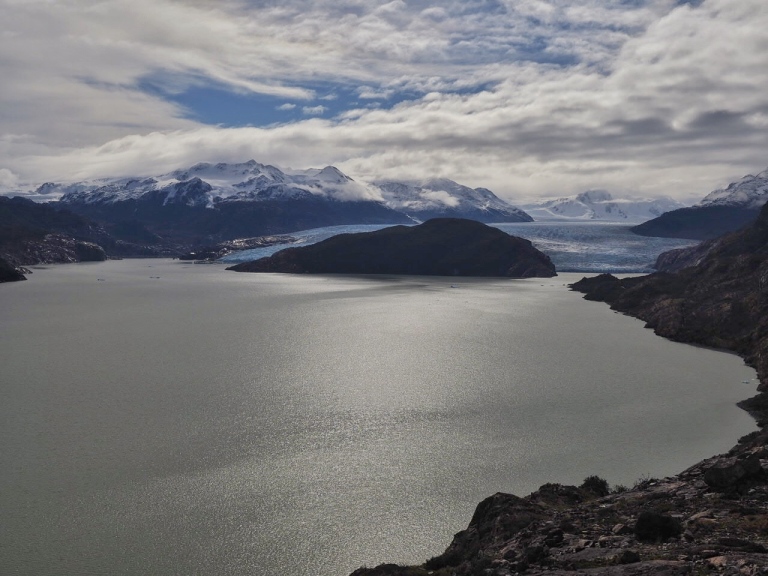 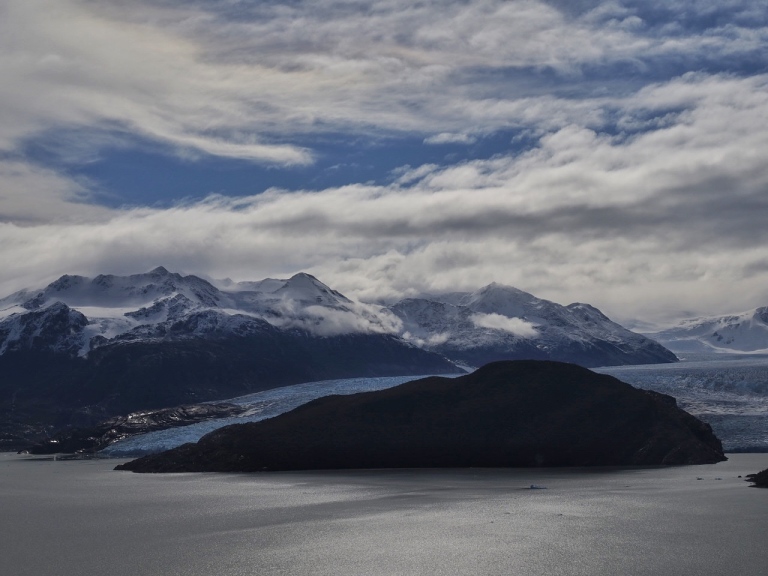 From there it was a steady downhill trek with closer and closer views of the glacier until we finally reached the Refugio. 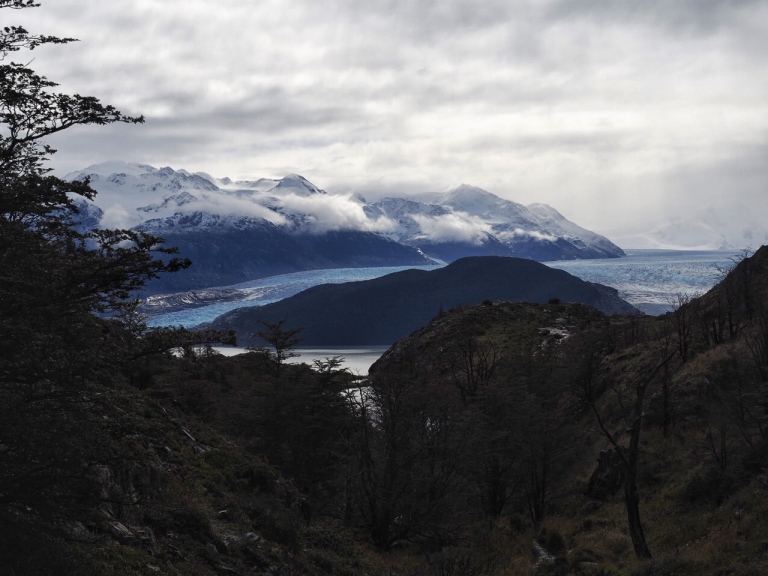 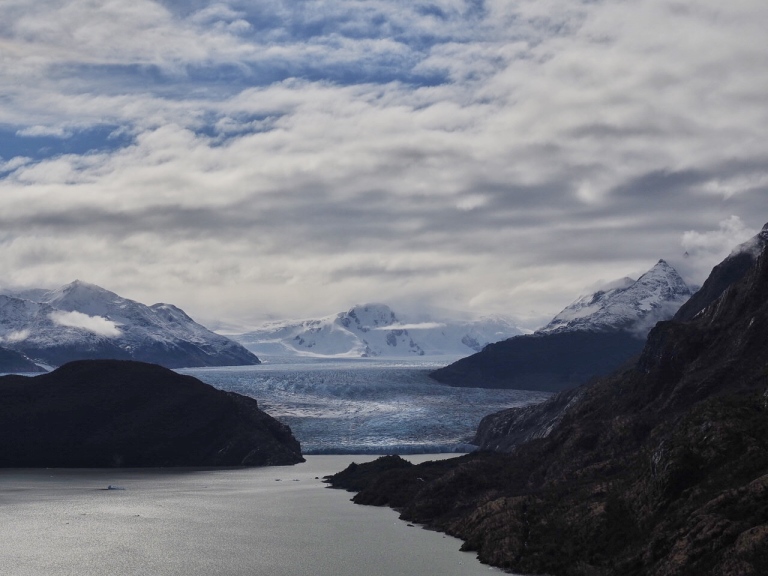 Our total mileage was 13.7 miles over 10.5 hours and it felt longer than that with all the weight we were carrying. Why did G bring such heavy camera equipment again?

After checking in with the extremely rude and unhelpful front person we headed to our bunk room. Although the room accommodated 4 people we ended up being the only occupants. It was a good thing given how much our shoes and socks stunk at this point. We peeled off our wet clothes and put our wet stuff around the community wood burning stove across the hall to dry despite a sign cautioning not to do that. It didn’t stop us or anyone else as you can see. 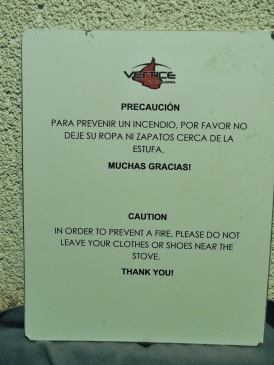 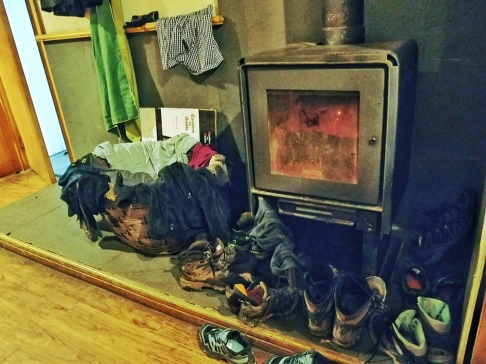 Dinner was a really tasty tomato soup and delicious beef and chorizo stew over rice. During dinner the representative from Bigfoot Patagonia (Kayak outfitter) came to brief us on the next morning’s kayak trip. He told us that we were lucky as the conditions for kayaking were expected to be perfect. Clear sunny skies and no wind.

We still had to hike 11km (7 miles) back to Paine Grande area to catch the ferry and bus back to Puerto Natales but we would worry about that tomorrow. For out last evening we enjoyed our accomplishment with a well-deserved Pisco Sour.

Managed by Vertice Patagonia this was the best stay of all the Refugio. Clean, modern and comfortable. Reminded me of a Colorado ski lodge. A nice ending after 4 days of hiking. Rooms are setup for 4 people so you’re not having to worry about sharing with lots of people. Beds really comfortable. Have to make your own bed but they provide all the bedding. Very nice common area to hang out and have drinks, read or commune with the other hikers. The front desk staff were pretty rude however. Highly recommend this place.