After a 12 hour bus ride that involved crossing the border into Chile and catching a ferry ride across the Straits of Magellan, we finally arrived in Punta Arenas. It was our starting point to explore Chile’s Patagonia region on the way to Torres del Paine National Park. We were going to spend a few days here before heading off to Puerto Natales where we will meet up with Sally to get ready for our multi-day W hike.

From One End to Another End

Punta Arenas is the southernmost city in Chile and a convenient base to explore the island of Tierra del Fuego, the Straits of Magellan and Torres del Paine. Strangely enough Punta Arenas and the surrounding area is also called the End of the World. How many of these are out there? So by taking the bus from Ushuaia to Punta Arenas we were essentially traveling from one End of the World to another. So confusing.

The first part of our journey took us through the mountains of Tierra del Fuego and the flat expanse of the Patagonia Steppe before we stopped at the border control in Argentina. Communication was only in Spanish so there was some confusion among the non-Spanish speakers as to what to do. Do we get off the bus or stay here and wait? Apparently we all needed go to the border control office, stand in line to get our passports processed. 10 minutes later we repeated the same procedure at the Chilean border. After being granted entry to Chile we were herded into an x-ray machine area where daypacks were getting scanned. While other passengers seem to be on the ball, we stood there confused because we weren’t told to bring our bags with us. Imagine our surprise to find out that our day packs were taken off the bus and left at the side of the x-ray machine ready to be claimed. Good thing G recognized his bag or else we would have left it behind.

It was at this point that D had an “oh shit” moment and realized that she did not book a hotel in Punta Arenas. D called Best Western in Punta Arenas to check for availability only to be told that they couldn’t book over the phone. We had to send an email. But I’m on a bus with no Internet access. Sorry, send an email. Resigned to our fate, G tried to reassure D that we would find a place that wasn’t a murderous hostel like in that movie with the same name. Hope he is right.

At the ferry terminal, we had to disembark from the bus while the driver loaded the bus on the waiting boat. Once our bus was loaded the ferry it left immediately. It seems that we were within minutes of missing the ferry. The ferry ride across the Strait of Magellan was quick and took only 10 minutes but served as a nice break from the cramped bus.

Crossing the Straits of Magellan 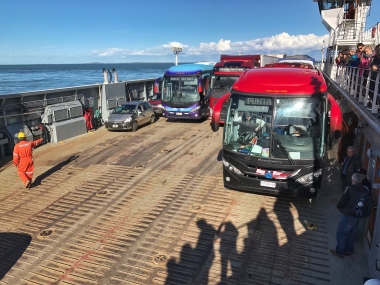 Our Bus is the blue one on the left

After the ferry docked we all boarded the bus again for the final leg to Punta Arenas. It was about this time that we started to get seriously antsy and just wanted to get to Punta Arenas so we can find a hotel and take a nice hot shower. We still had another 2 hours to go. Ughhh!

When we reached Punta Arenas, we rushed over to the Best Western, only to find out that they were sold out. D was so tired she was about to throw a tantrum. We asked the front desk guy if we can use their wifi to search for hotels. We chose the Tierra del Fuego hotel which happened to about 2 blocks away. It was more than what we like to pay for one night but we were tired and this was close by. It turned out we were able to stay at Tierra del Fuego for the duration of our stay and even got a much lower rate than what we got quoted from Booking.com. Things worked out after all. Tantrum averted.

After settling in, we meandered the streets of Punta Arenas in search of a place to have dinner. 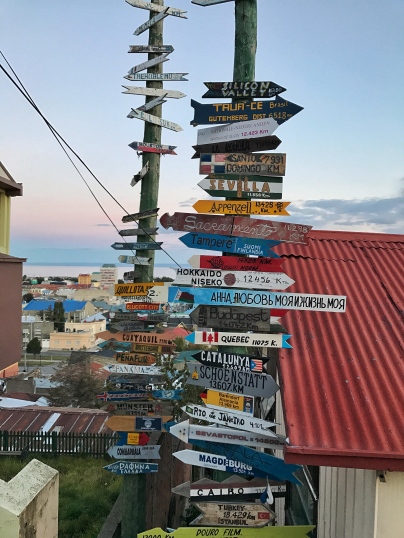 Dinner was at La Marmita and was very good. Simple Chilean comfort food. G had their homemade brew and thought it was one of the better beers he had. The atmosphere was warm and cozy, just what we needed to end this long day.

The Other End of The World

The next day was a Sunday so no surprise most places were closed including the tourist office. So we walked around aimlessly around Punta Arenas visiting the Plaza de Armas (Plaza Munoz Gamero) where a memorial to Ferdinand or Hernando Magellan is located. 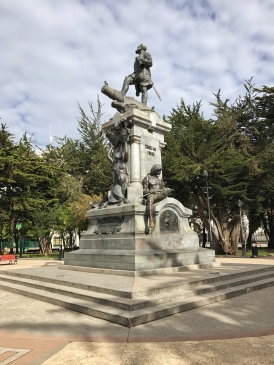 Some of the fancy buildings surrounding the Plaza de Armas (Plaza Munoz Gamero).

The harbor and waterfront 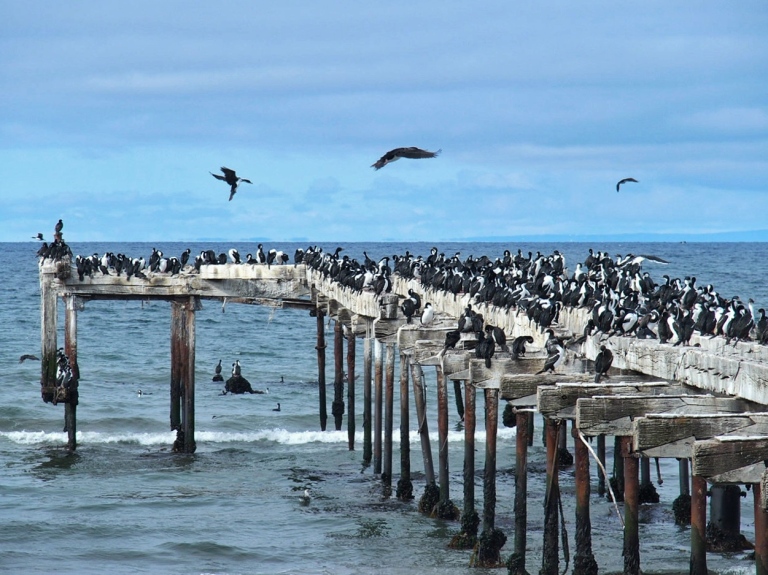 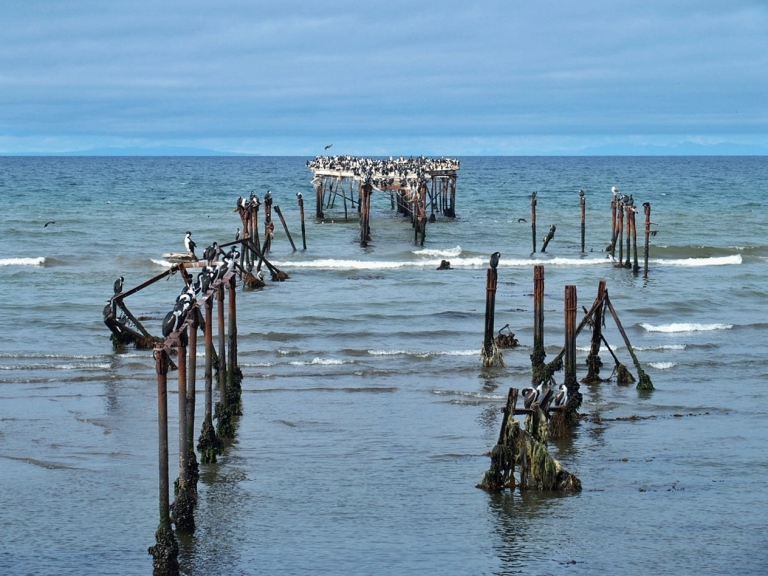 We saw these cool murals painted on the sides of the buildings. 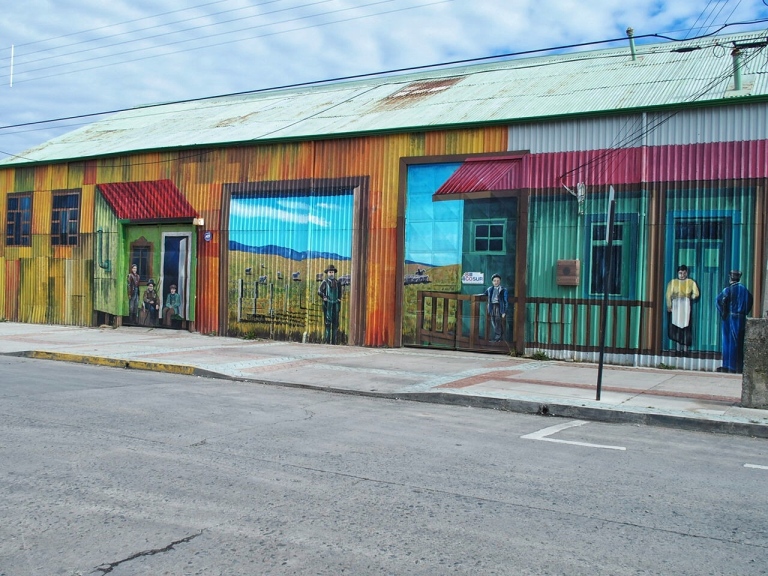 Do you recognize anyone posing in these murals? 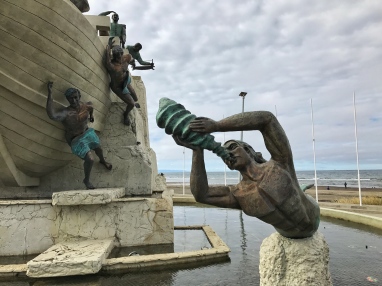 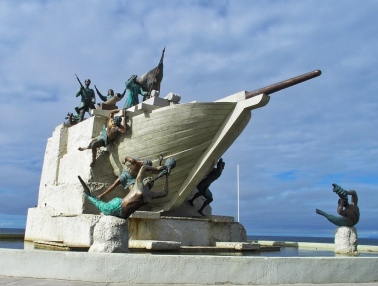 A street sign after one of the main liberators of Chile.

We stumbled upon a local tour agency where we booked an all day tour to go see Penguino Rey (King Penguins) the only colony in South America. The tour was for Tuesday since the Penguino Rey Reserve was closed on Monday. Other tours that were offered were really expensive zodiac and kayak tours, Magellanic penguin tours (can’t get enough of those) and city tours among others.

So Monday found us with another free day. We took care of some errands, visited the Centro Cultural Braun-Menendez museum and the Muncipal Cemetery where the bodies of the rich mingle with ordinary citizens. 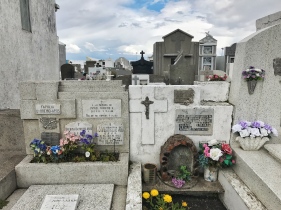 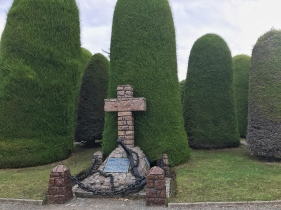 Punta Arenas is a worthy stopover for an opportunity to see penguins and participate in boat activities on the Straits of Magellan.

A Chilean bus company that runs several routes within Southern Patagonia including the Ushuaia -Punta Arenas route and Punta Arenas -Puerto Natales route. They have an online  site where you can check schedule, plan your route and buy tickets which is a big plus in my book. Other bus companies require you to send an email, call or go to the bus terminal.

The buses were clean. Since this was not an overnight trip we had semi-cama class. As mentioned above communication was poor or in Spanish, so pay attention.

For the Ushusia to Punta Arenas route the company gave us a small snack though you should bring your own food as this trip is long. Chile does not allow fresh fruit and meat to cross their borders which is why they x-ray bags. So if you have fresh fruit eat it before you reach the Chilean border.

Costs about $60 USD each to take the bus from Ushuaia to Punta Arenas.

Great location about 3 blocks from the Plaza Armas. Room and furniture were somewhat dated and slightly worn. But it was clean and comfortable. Our room was facing a plaza so there was some noise. Breakfast was pretty extensive and included eggs, cheese, coldcuts, breads, cereals and pastries.

Standard restaurant serving basic Chilean fare. We got the beef soup which was really good. The corn on the cob in the soup was really dried out however. Cash only 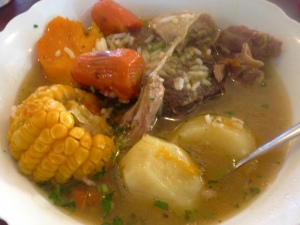 Little chocolate shops that serves food and desserts.  We went here to get hot chocolate and churros. Churros were OK.

A hip funky cafe on the waterfront adjacent to the Maritime Monument. You can’t miss it.  Serves sandwiches, pastries, coffee and teas. Food was OK nothing spectacular. Great view of the Straits of Magellan.

Small cute restaurant overlooking the city tucked away from the main tourist area. Serves mostly seafood. D had a beef ceviche and G had octopus. The beef ceviche was good but after a while the acidness from the lime got to you. Cash only.

We got churros from one of the many churro trucks that are in the city.  The churros are more bready and less sweet than what we are used to. They were OK.