Natural springs and places to shelter were precious to ancient bushmen. They were nomadic and therefore reliant on finding these water sources based on their own knowledge and that of others. The rock paintings at Spitzkoppe and carvings at Twyfelfontein were their attempts at communicating the existence and locations of springs to all who arrived there. We were heading into Damaraland where you can see this ancient version of Google maps. It’s also where you can find the unique desert-adapted elephants one of only two places where they exist.

Moon Landscape and the Ugliest Plant

Before heading off to Spitzkoppe, we took a short detour to see the Moon Landscape area and Welwitschia trees based on the recommendation of our hostess at Desert Breeze Lodge. The Moon Landscape was similar to and as interesting as the scenery on the way to Swakopmund. 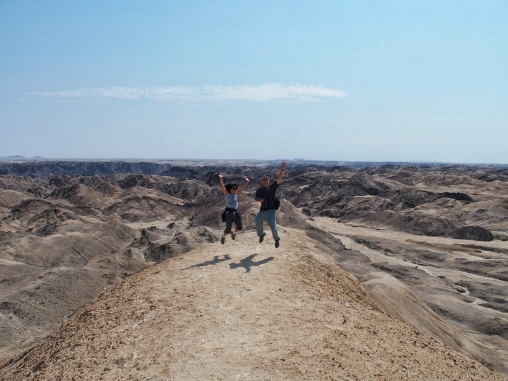 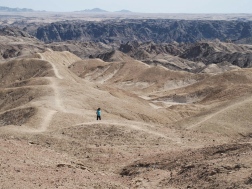 Kim on the “moon”

After stopping off to hike around the dry washes, we proceeded further east on the backroads in search of the weird and bizarre Welwitschia trees. These are “trees” that don’t grow vertically and live up to 2000 years. They only ever have two leaves, a stem base and roots. That’s it. The leaves get shredded over time by winds giving the impression that there are more than two leaves. The pic on the right was my attempt at channeling my inner Georgia O’Keefe.

Once we reached Spitzkoppe, we signed up for a bushman painting tour that afternoon and set up camp. Spitzkoppe is the name of the main granite peak in the park. Our guide gave us a brief intro and history of the area before launching into a quick lesson on the Damara click language. We all took turns botching our attempts to mimic the clicks  and pronunciations of even the simplest phrases.

He nevertheless showed us the 2000-4000 year old paintings and gave us what he knew about their meanings. First he showed us the panel called Small Bushman Paradise 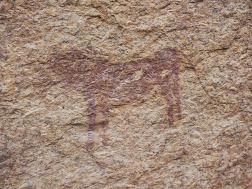 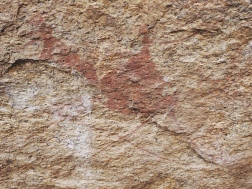 and then the Golden Snake in a nearby cave. 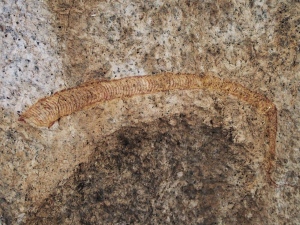 We went off on our own and saw a pair of pioneer graves, tiny remnants of an old fort, and a natural bridge. 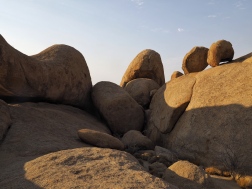 Kim and G at the bridge 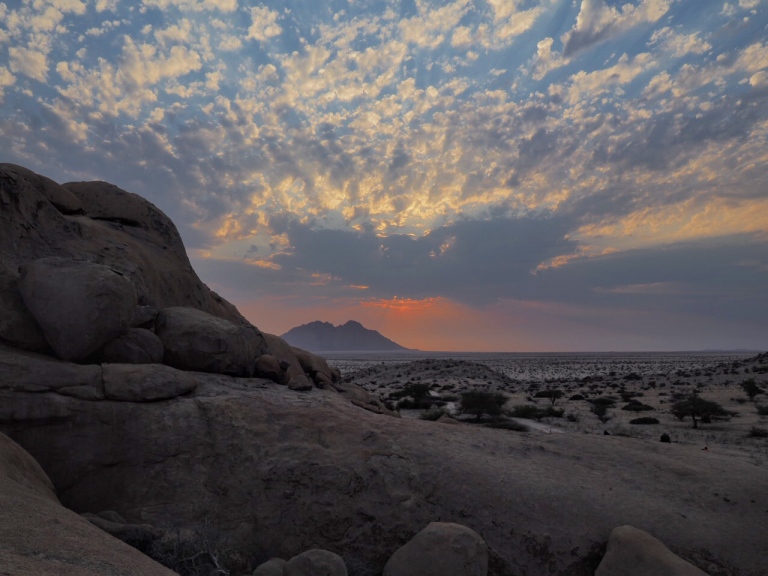 Our next stop, the Twyfelfontein petroglyphs. Along the way we saw this cool mural in an abandoned building.

We went on the Lion Man route which lasted 45 minutes and showed us a good selection of etchings. The local geography is sandstone with some parts covered by desert varnish similar to what was used as canvas for petroglyphs in the US southwest.

Do you see the Lion Man? 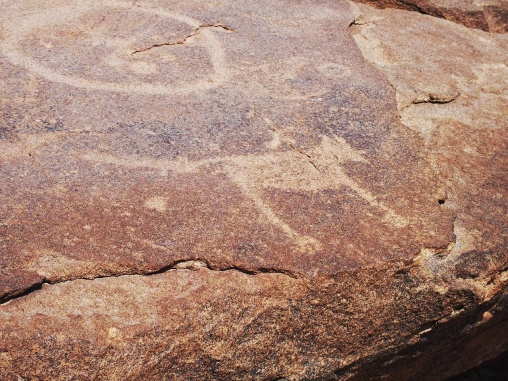 Twyfelfontein-Jock etching of penguin and other animals

Do you see the lion man?

After the tour, we asked the guides where we can see the desert-adapted elephants in the area. The elephants weren’t that far but unless you know the area and roads it would be hard to see them. So one of the guides there offered to take us for a reasonable price but we had to wait until his shift ended at 5pm. With an hour to kill we checked out some of the other local formations, the Organ Pipes and the Burnt Mountain. 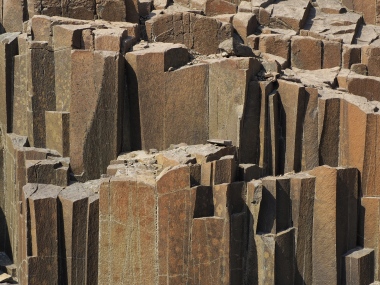 We went back to Twyfelfontein to pick-up the guide to find the elephants. The guide who we originally spoke to bailed on us and asked some other guide to show us the elephants. Whatever, as long as we can find the elephants. As it turned out, we would have never been able to find these elephants on our own as getting there involved driving completley off the main road into a dry riverbed. G was struggling with the off-road driving and drove too slowly for our guide’s taste. Wanting to make sure we got back before sunset, our guide took the wheel from G and showed us all how a skilled driver handles a 4WD on the back roads.

We were able to find the elephants and saw 6 elephants including a youngster. These elephants exhibit physical and behavior traits that differ from other elephants that allows them to survive in the harsh environment. Coming back was a blast as our guide drove through the dirt roads like he was on a speedway. It made Kim nauseous afterwards. 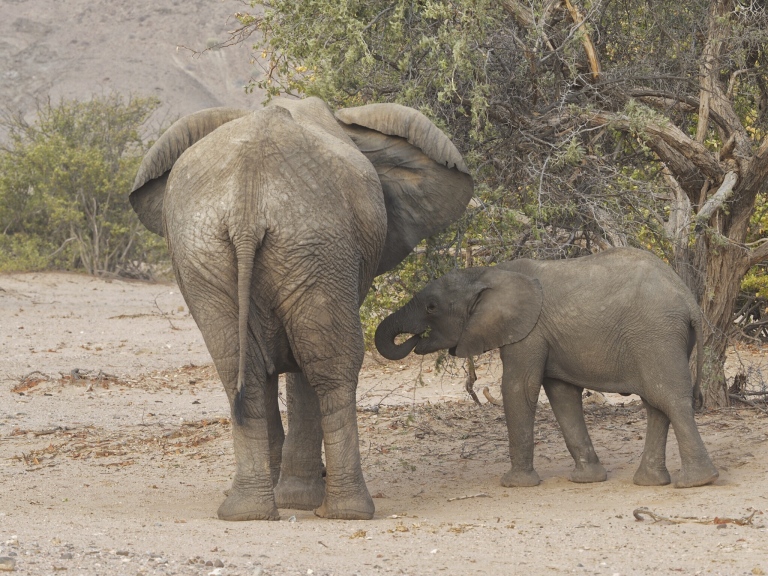 Avis Fail#4 Update:  Yes, the replacement battery for the fridge stopped after 2 days. Without power at the campsites, the fridge held out somewhat but was starting to warm up. Without any option we had to buy ice at our next stop to keep things cold until we can plug in.

Post note:  We later found out that it was a circuit breaker that needed to be reset every time we started the truck.

Evil Jane Update:  At Swakopmund we finally checked the settings on Evil Jane and found that someone had set it to paved roads only and no U-turns.  Really?  So Jane wasn’t evil after all just following orders. Kim thinks this should be an Avis Fail #5 b/c Avis should have reset the GPS but I say it’s our own fault for not checking.

Great campsites overall. It’s on a first come, first serve basis. We chose 11a as it was the best location for sunset viewing.
No electricity, drop toilet. Showers located near the registration office. Restaurant on site. 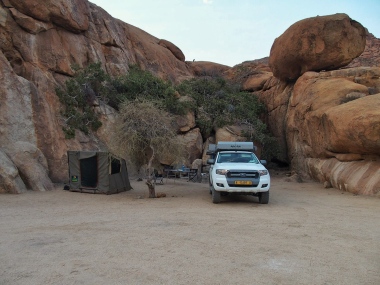 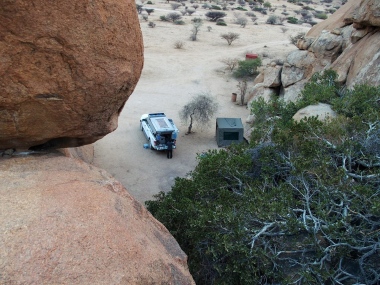