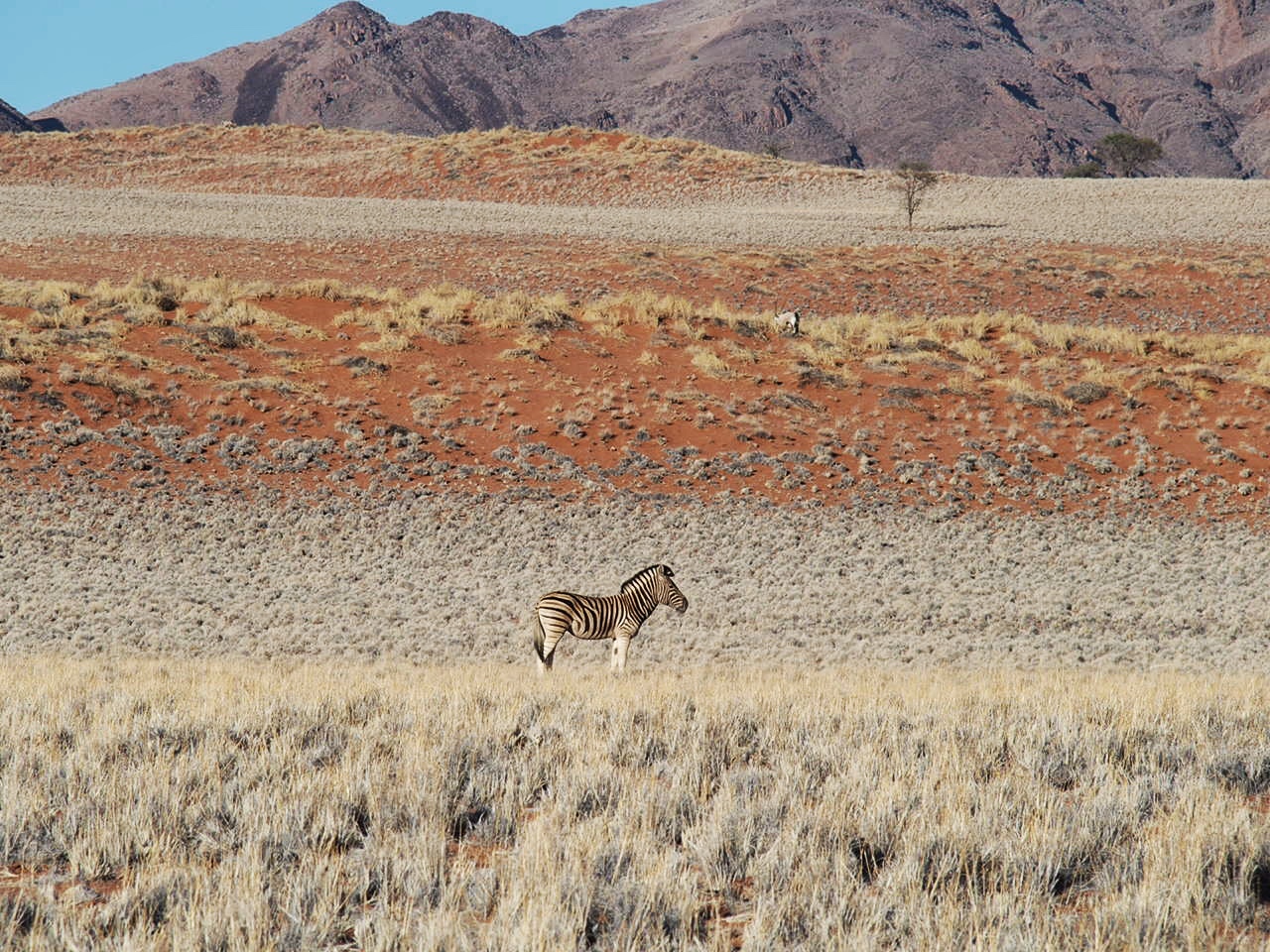 We had to backtrack a little to get to our next destination, the NamibRand Family Hideout, a private reserve that is part of the Namib Rand Nature Reserve. Andy thought we would enjoy this place as it would allow us to enjoy the scenery and night skies of the Namib desert in absolute seclusion. And he was right!

The Namib Rand Nature Reserve, in the heart of the Namib desert, used to be a collection of sheep farms that have been integrated into a game sanctuary. It also has one of the darkest skies on earth. There are strict rules about the number of tourists allowed, about 1 bed for every 2,000 hectares, which makes this place pretty exclusive.

First sighting of plains zebras we saw on our way to the reserve. 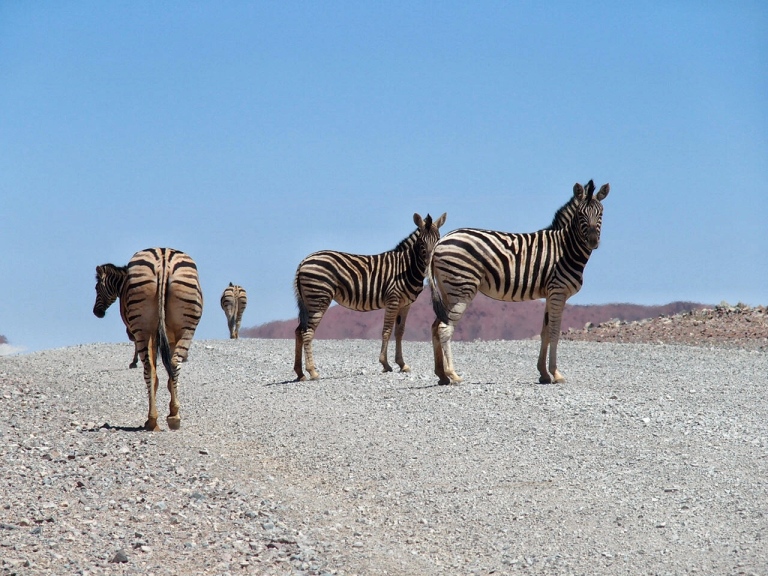 Some birds we saw along our drive. 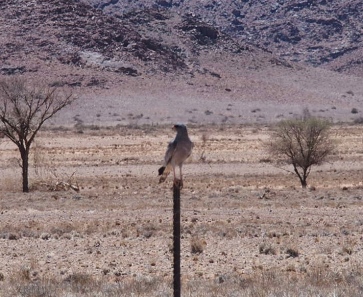 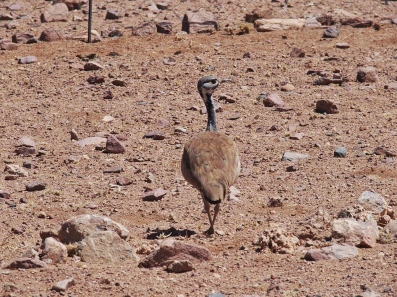 And We Have Avis Fail #4

Along the way to the reserve, we stopped for lunch and noticed that the temperature of the replacement fridge was slowly rising. We knew it wasn’t the fridge because it works fine when we plug in the unit directly, so it had to be the battery that provides the secondary power source when the unit is unplugged. This was a huge problem for us as there is no electricity at the campsite and we had no way to plug in the unit to keep our food from spoiling. Luckily for us only perishables we had were milk, cheese and yogurt which we could get by without. It was just another inconvenience in the saga of Avis Fails.

This just added to our problems when earlier in the morning the hinge on the ground tent broke but nothing that rolls of duct tape couldn’t fix.

When we arrived at the Hideout we were given the runaround at first but finally met our host Titus who showed us the way to our campsite. He also gave us a map of the area which showed us where we are allowed to do self-drives and advice on how to drive in sand (low gear on the hills and don’t stop) then handed us a radio in case we needed help. We also asked him if he can help check the fridge battery for us, which he did the next day and confirmed our suspicion that the battery was not working properly.

The Hideout has only two campsites that are located among the dunes and are so far apart from each other that it feels like it’s only you and the surrounding desert. The campsites are solar powered for hot water and come with ensuite bathrooms, a rare luxury for us campers.

During our 2 days here we did the same 20 km self-drive loop, around the reserve, several times as well as short hikes searching for animals.

On the self-drive loop

We saw the ubiquitious oryx (seriously they are everywhere!), baby oryx (no wonder they keep breeding), plains zebras, springbok and karhaans (some bird). We wanted to see the bat-eared foxes, a species of fox named for its ears. These animals are nocturnal and was told that the best place to see them was on the road leading out to the entrance, but no such luck. 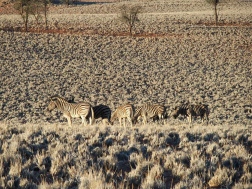 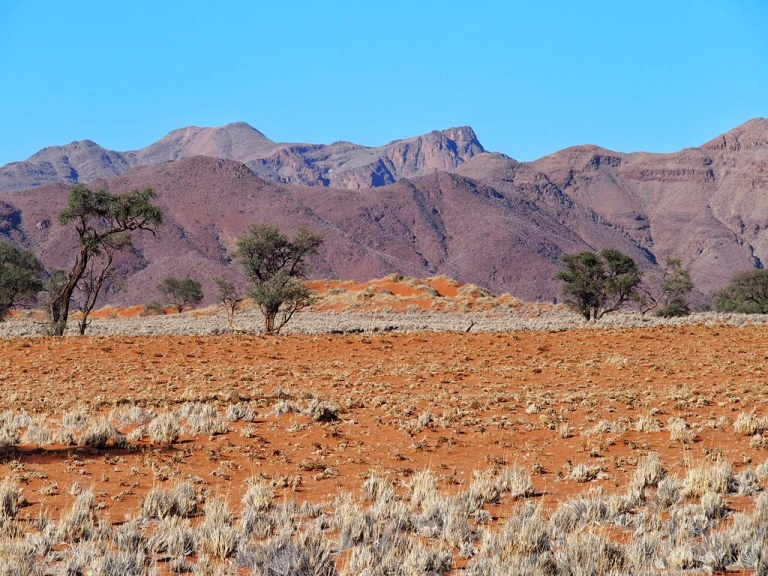 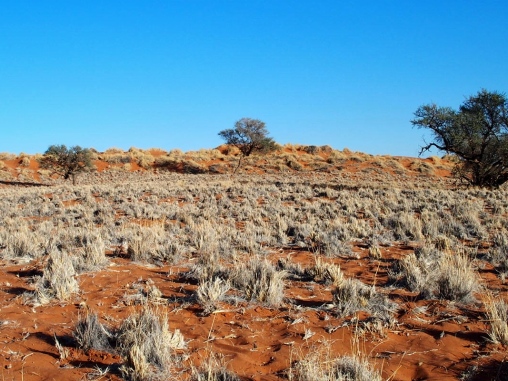 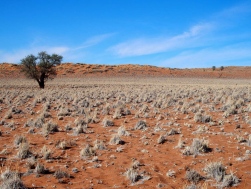 Of course during one of the drives G chose to ignore Titus’s advise on using low gear while going uphill on sand and got stuck. He reversed downhill then proceeded to gun it on low gear grinding the clutch along the way. Hope Avis isn’t reading this.

At nightfall everything fell silent. Unfortunately the skies weren’t very dark as it was close to a full moon. G and Kim decided to get up early on the first morning for moonset so they can look at the skies. Kim thought G was going to show her a mini astronomy lesson but G was too busy setting up his camera for pictures. Eventually Kim gave up waiting for G and went back to sleep. 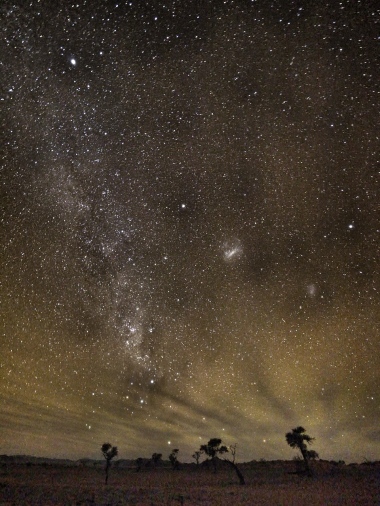 After leaving the Hideout we stopped over at Sesriem to fuel up and to have some awesome meat pies before stopping at Moon Mountain Lodge, our accommodations for the night. This wasn’t just any ole lodge but rather ultra luxirious tents each with it’s own mini swimming pool. Think hot tub but with cold water, a perfect complement to the dry furnace of mid day. Yet another place we would not have booked on our own.

As per usual we had trouble finding the place as we listened to Evil Jane while the bad signage had us going 2 miles into the desert in the wrong direction. We ended up just driving to those weird structures perched on the hillside if for no other reason than to ask directions. Nailed it!

Oryx at our campsite

Lizard near our campsite

Tok Tokkie at our campsite

Gecko at our campsite

Super friendly owners.  Included dinner since there really is no other place nearby to eat.

The accommodations are ultra luxurious tents.  If only camping can be like this.  Unfortunately there was no fan so it became extremely hot and uncomfortable to sleep. 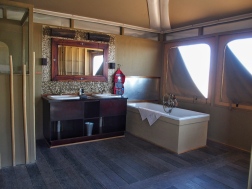 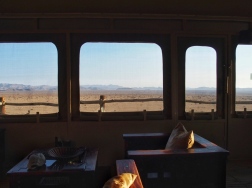 Bonus were the pet cats! 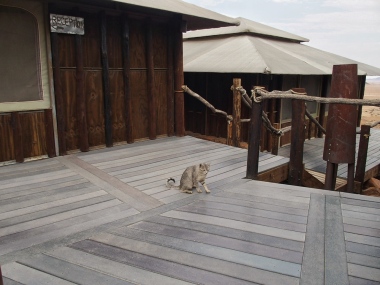