It was our third day in the town of Nyaung Shwe, the main access point to Inle Lake, and we were finally getting out on the water. It was rainy season after all and so our activities were being dictated by the weather Buddhas (Is there such a thing?).

We spent our first two days wandering around Nyaung Shwe, exploring the scruffy riverside and sampling its many restaurants while being approached by boatmen offering excursions on the lake.

We finally took one boatman up on his offer and agreed to a private tour starting at sunrise the next day when less rain was predicted. Following a well-worn route, the tour would take us around the lake passing stilt villages, floating gardens with stops at a lakeside market, a pagoda, and some craft workshops. We also opted to take a side trip (for extra cost of course) to visit the ruins of Indein village.

We met our boatman very early the next morning and he took us to where our long boat was waiting. We were caught off guard when he didn’t join us and put us on someone else’s boat. It’s common practice, apparently, for middlemen who speak good English to scout for clients on behalf of boatmen who struggle with the language. It was the classic bait and switch and we fell for it. We ran into him later on the lake with other clients, so at least he wasn’t a pure middleman. It was all good, though, as our new boatman spoke some English.

We left before sunrise hoping to catch some colors breaking over the lake and to see the renowned Intha fishermen performing their unique style of rowing. Although we didn’t get the colorful sunrise, we did come upon fishermen in their wooden canoes, fishing with nets and baskets while steering their boat with one leg wrapped around a paddle (I’ll have to try that some time). Due to their popularity there are now “tourist” fishermen who will put on a show for a tip so you can capture that iconic image. The fishermen we encountered, however, paid no attention to us as they were busy actually fishing. 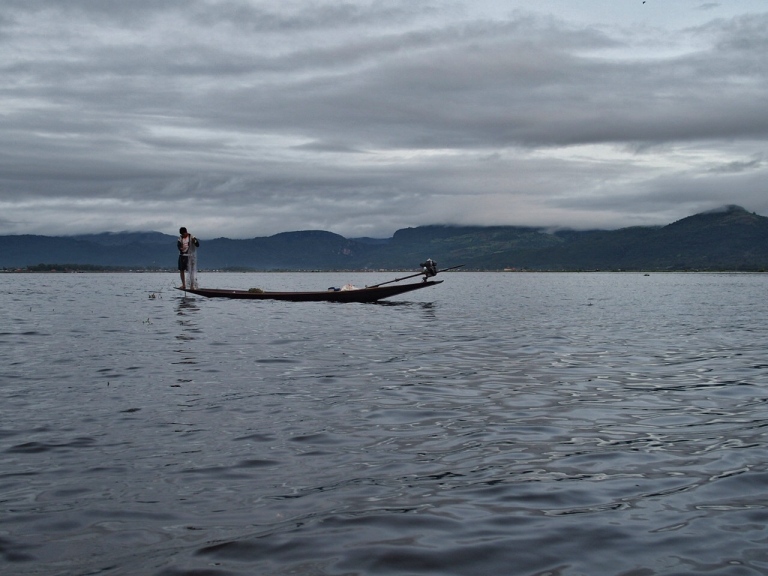 Passing stilt-houses along the way, we did a quick stop to look at the floating gardens that line much of the lake shore. At this time of the year the gardens were growing tomatoes. 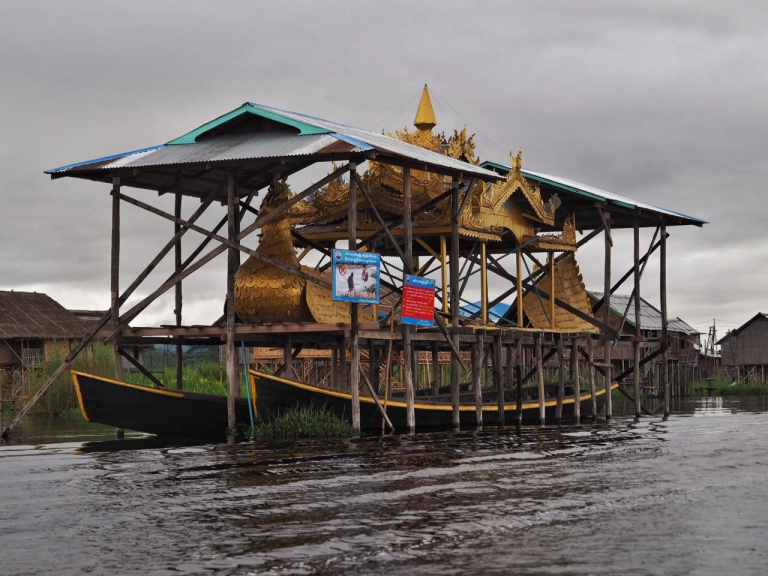 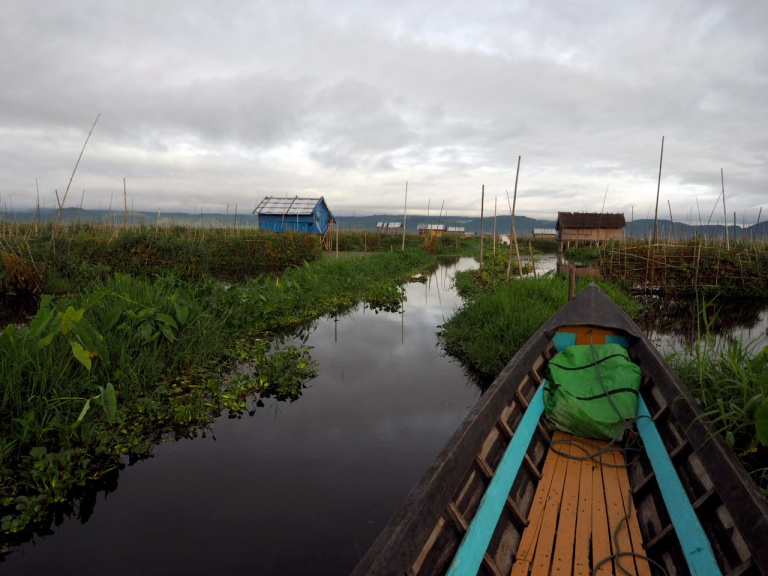 The 5 Days Market in which the location of the local market rotates around five villages around the lake was our next stop.  On this day it was at the village of Shwe Nyaung.  We arrived so early that we were the only non-locals there.  We wandered around freely and observed locals from different ethnic tribes in colorful costumes mingling and going about their daily lives. They came overland from the hills and by boat from other parts of the lake in a continuous flow, bringing goods to sell and shopping for themselves.  There was an astounding variety of produce being sold including tomatoes, tea leaves, hot peppers, beans, thanaka bark and the addictive betel leaves.  We also saw people selling car parts, rolls of fabric, cheroots (cigar), longyis and Shan bags. 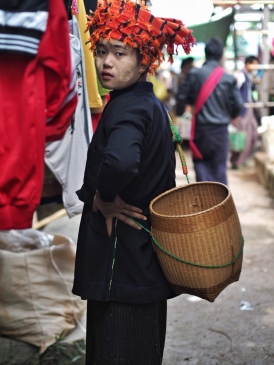 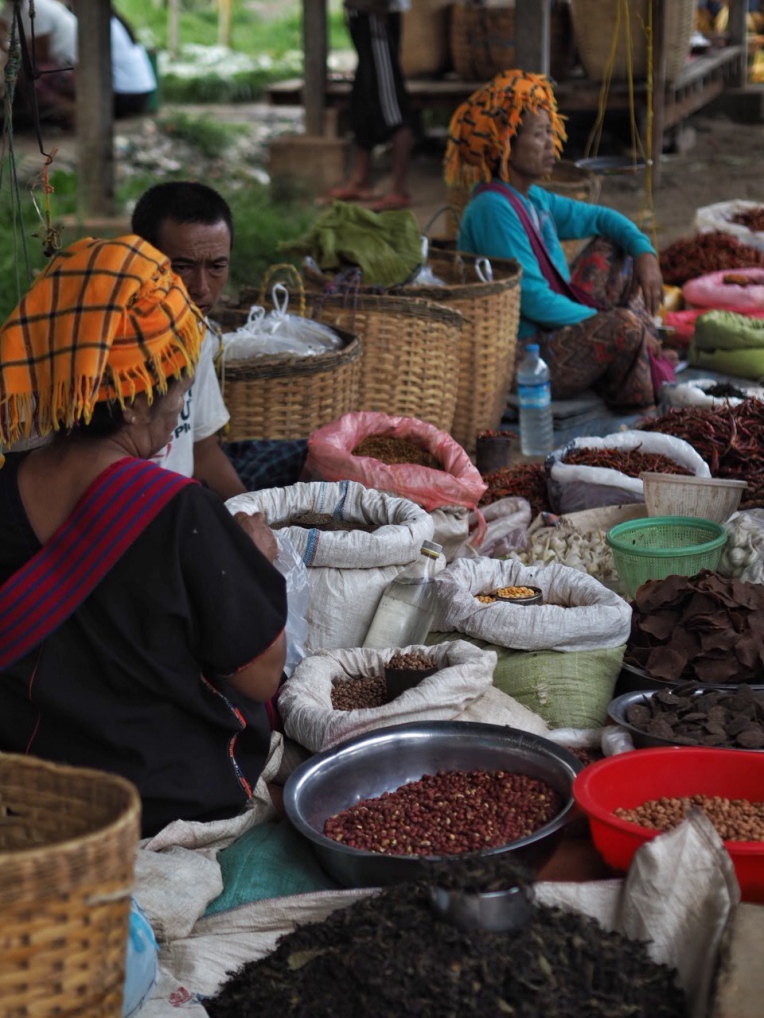 Having visited a ton of pagodas by this point, there was really nothing extraordinary about Phaung Daw Oo located in the village of Ywama.  Inside we did find it amusing to see men applying gold leaf to these golden globs at the center of a stage which were once Buddha figures.  These Buddhas had so much gold leaf added to them that they look more like half constructed snow men than Buddha.  Only men can apply gold leaf to the Buddhas as women are prohibited from performing this ritual.

Ywama village is where you also can find locals working their craft such as silver smithing, weaving, and umbrella making.  Boatmen stop at these craft workshops hoping to make a commission off your purchases.  We opted to skip the silk weavers and boat makers but visited Shwe War Win, a silversmith workshop.  Despite its obvious catering to tourists it was interesting to see how they produce Shan jewelry and ornamental bowls from the silver mined north of here. 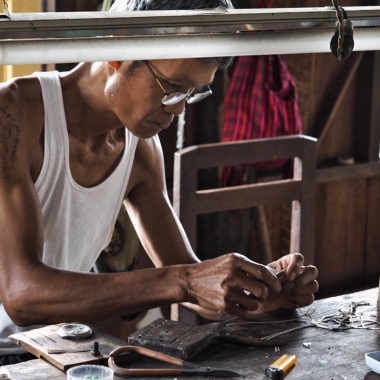 Next door to Shwe War Win is a weaving workshop operated by the Padaung tribe’s “long-necked” women. Both elderly and young women were there working and we could see the transition that occurs when their necks are “stretched” with the periodic addition of brass rings over a lifetime.  The visit to this stop is a source of controversy as some people consider it exploitation of these women while others contend that this provides an opportunity for them to leave their village and make some money.  And the question becomes how is it different from gawking at the Massai, Hmong & other tribal groups?  We’ll be the first to admit that there was some awkwardness on our part as to whether we were being intrusive but they seem fine with us taking their picture.  You decide!! 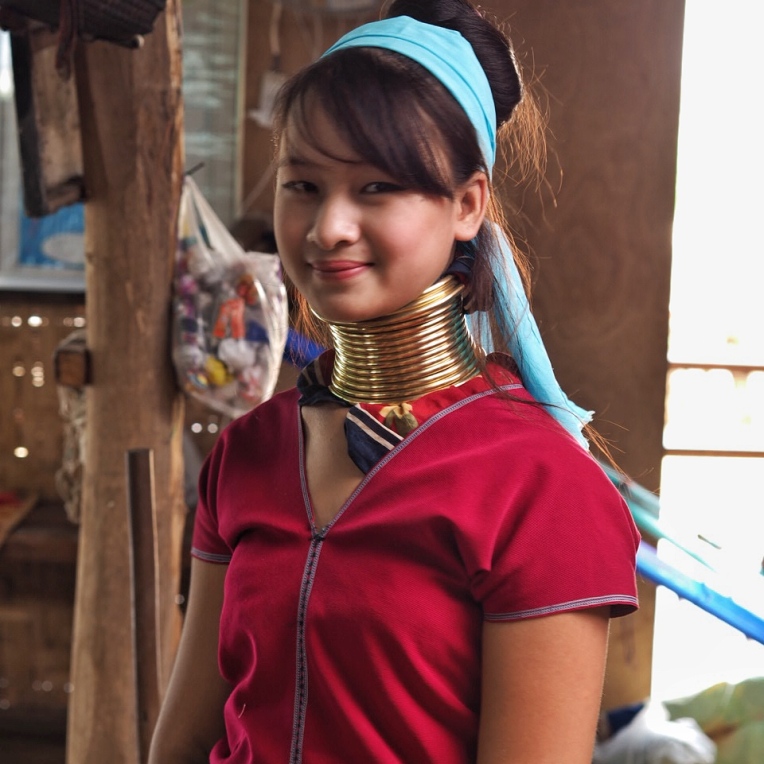 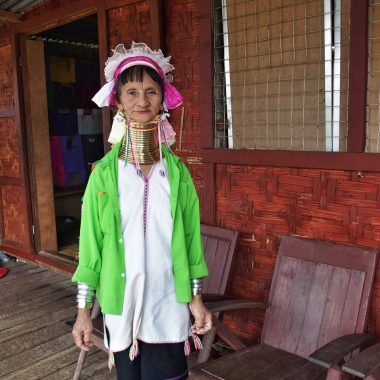 The pagoda complex and ruins at Indein was our final stop.  A covered pathway lined with non-stop souvenir stands leads to the main shrine on top of hill where Buddha is waiting.  Along the covered pathways we caught glimpses of the surrounding ancient crumbling stupa ruins.  Periodically we would veer off the covered pathway to check out clusters of the stupa ruins. It was amazing to see all the tall, narrow stupas everywhere we looked. They came in different colors and states of repair, having been built between the 12th and 18th centuries and being cared for by the donating families (or not). 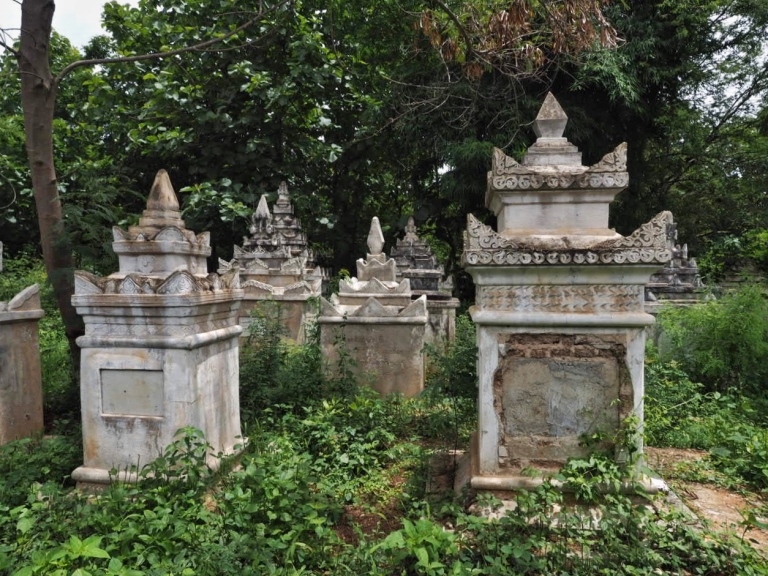 Once at top we paid homage to Buddha and walked among the restored gleaming stupas near the temple.  We liked the ruins better. 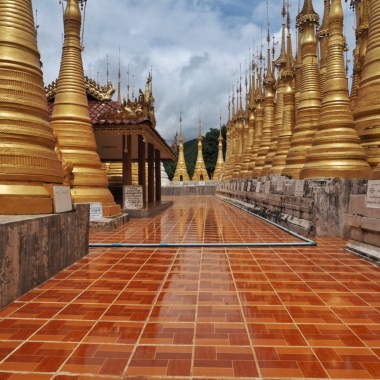 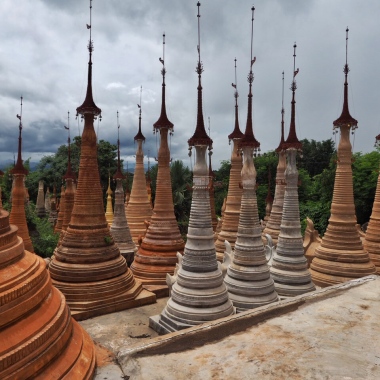 Once back on the boat our driver asked if we were interested in seeing the Jumping Cat Monastery.  Though the cats no longer jump they still do live there.  After a long day on the lake we were ready to head back to Nyaung Shwe and opted out of seeing the cats.

I know a chance to see cats in any capacity what were we thinking.

One thought on “Inle Lake Immersion”