Few places in the world offer the opportunity to see King Penguins (Penguino Rey) in the wild and for our last free day in Punta Arenas we were going back to Chile’s Tierra del Fuego to see the only breeding colony found in South America.

Tierra del Fuego is a huge island divided between Argentina and Chile. Gloomy Ushuaia is at its southern end and the Chilean city of Porvenir is at its northern end. It is at this northern end of the island where a small colony of King Penguins have establish themselves. In a well protected bay called Bahia Inutil (Useless Bay), so called because its shallow waters make it a terrible place for shipping, the colony made its first appearance over 10 years ago and are thriving. In the absence of predators and the presence of abundant food, the penguins have no reason to leave and live here year-round.

The penguins, of course, were the main draw for the tour we joined, but the distant location of the park and the inconvenient Punta Arenas-Porvenir ferry schedule makes this an all day adventure. Because the last ferry returns to Punta Arenas at 2pm (not enough time for the tour to catch it) the tour has to drive about 1.5 hour north to Punta Delgada to catch the Primera Angostura ferry crossing to Punta Arenas. (This is the same crossing we did 3 days ago when we came by bus from Ushuaia.) To break up the drive the company includes, a number of cultural and historical sites before and after the penguin viewing.

First we crossed the Straits back to Tierra del Fuego to the city of Porvenir from Punta Arenas, the longest crossing in the ferry system which took about 1.5 hours. 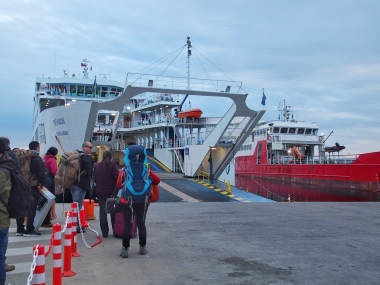 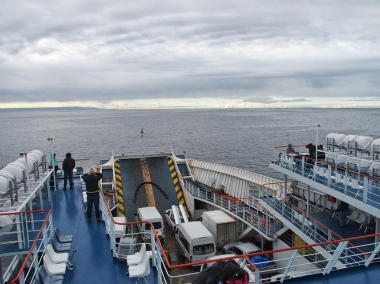 Once on shore we stopped at the nearby Museo de Tierra del Fuego where we learned of the region’s history and of the indigineous tribes that used to roam this part of the world. Known as the Selk’nam or Ona tribe, they were one of the land-dwelling tribes that subsisted as hunter gatherers. It was smoke from these people’s fires that made Magellan coin the phrase Tierra del Fuego when he explored the island. Their use of guanaco hides wrapped around their feet made for huge footprints in the snow which led Europeans to call the region Patagonia, land of large feet. Now extinct as a tribe, from the treatment by European settlers, effects of disease and cultural stripping, their memory is now kept alive in the form of souvenir trinkets and picture postcards.

There was a diorama depicting the Hain an initiation ceremony for Selk’nam adolecent boys. This ritual involved naked men wearing nothing but body paint and masks running around one of the coldest places on earth.

The mumified remains of a woman named “Kela” discovered in the 1970’s.

We stopped briefly at a small park dedicated to the indigineous tribe, Plaza Selk’nam. The Kingdom of Penguino Rey

The Parque Pinguino Rey is an open field on the bay intersected by a river which acts as a natural barrier between us and the penguins. Unlike the tour of the Magellanic Penguins on Martillo Island where we could walk among the penguins, the closest we were able to get to the kings was about 50 yards. This was fine with us as it protects the penguins from the asshole selfie-taking tourists.

There are two viewpoints: One overlooks the beach where some juveniles were hanging out, and the other overlooks a small field where most adults and chicks were found. Only a couple of juveniles were visible at the first point but there was a fox-looking critter that was either a grey fox or a culpeo roaming around looking for a meal.

The second viewpoint was protected by a wooden blind with gaps at different heights overlooking a group of about 20-30 King Penguins.

Even from 50 yards away you can tell these birds were really big. These brightly colored birds are the 2nd largest penguins after the Emperor penguins. 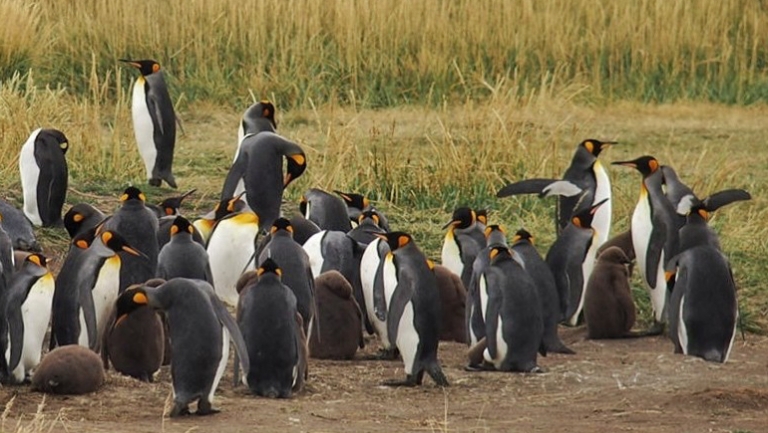 They made an impressive racket with each bird that called out stretching its neck straight up until it was done and then bowing its head reverentially for a few seconds. With their dark black head accented with splashes of orange on their cheeks and beaks these were certainly the prettiest penguins we’ve have seen. 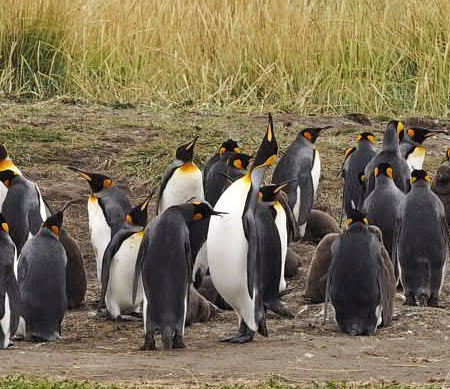 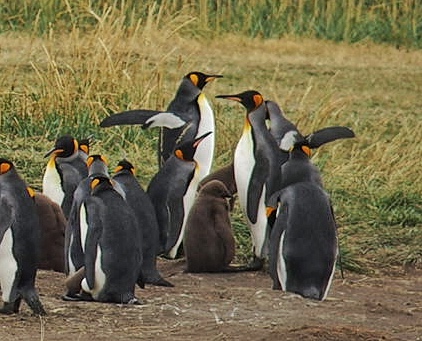 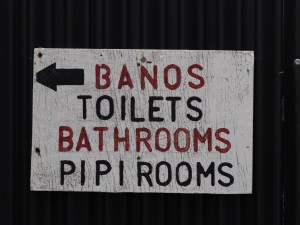 Before ferrying back across the Straits we had a few more stops. One was at a tidal marsh where flamingos hang out, unfortunately way off in the distance. 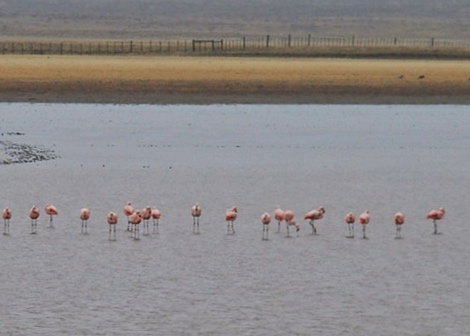 And the last was the abandoned Estancia San Gregorio with a pair of cool shipwrecks on its beach, the Ambassador and the Amadeus.

On the short ferry ride back we saw a single Commerson’s dolphin. Also known as the Skunk dolphin or Panda dolphin due to their very distinctive black and white coloring. They are really very cool looking. Google it.

By the time we arrived back to the hotel it was after 8pm which made for one long tiring day but all worth it to see the elegant and colorful Penguino Rey in their natural habitat.

We booked directly with this tour outfitter at their Punta Arenas office. The all day tour includes a guide, pick-up/drop-off at your hotel, ferry crossing, museums and sites. Does not include lunch or the park entrance fees. The tours are daily (weather dependent) except on Mondays when the reserve is closed and the ferry is shut down for maintenance purposes. The minivan they picked us up felt a little cramped.

Restaurant/Bar located in the hotel. After our long day we didn’t want to go too far. Surprisingly really good food.

One thought on “The Penguin Kingdom of Tierra del Fuego”