After our narrow escape from Flores, we traveled to the island of Java with our first stop being in the town of Cemoro Lawang, the gateway to Bromo Tengger Semeru National park.

Otherwise known as the Bromo region,  this is considered one of the most scenic parts of Java with breathtaking and surreal views of the lunar-like landscape surrounded by the crater walls of a much larger and more ancient volcano now called the Tengger Caldera.  Gunung Bromo and Gunung Semeru are still active volcanos.  The last eruption from Bromo was in December of last year and trips to the crater were shut down for a month.  The big 2010 eruption shut down the crater to tourism for a whole year.  Although the local Tengger people were still allowed to live their lives in the crater valley, tourists had to resign themselves with views from the crater edge.

To get to Bromo you can take a shuttle bus from the airport to either the train or bus station. Then take a train to the town of Probolinggo. From Probolinggo catch a mini-bus (if they’re full enough to leave) to Cemoro Lawang.  Or you can do it the easy way and hire a private car for a 4 hour drive to Cemoro Lawang, which is what we did.

By the time we arrived in Cemoro Lawang, it was pouring rain and did not look promising for volcano viewing activity. We decided to hang out for a couple days to see if things cleared up.

The morning after was beautiful, as if none of the previous night’s weather had ever happened. We took a stroll up the main drag and were hit in the face with an incredible view of Gunung Bromo and its sibling volcanoes rising above a foggy valley. They were larger than life with Bromo adding a constant plume of steam. The fog dissipated by 7am but clouds returned at sunset to give us surreal views to end the day. 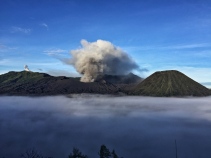 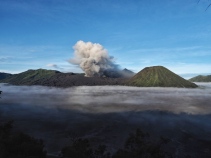 Views from an overlook in the town of Cemoro Lawang

Once we got oriented,  we decided to hike to Seruni Point, a trail that takes you to a higher point with more stunning views of the volcanoes. The path ended up being a more than 700 foot climb first on a road and then on stairs. We had nice views of the village and farms all at cloud level. 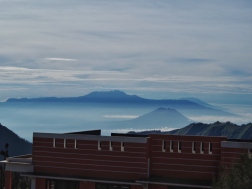 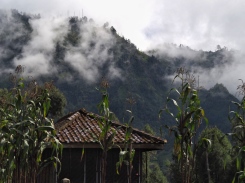 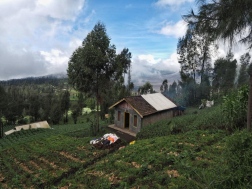 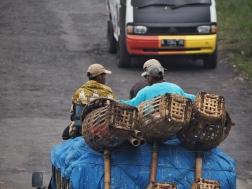 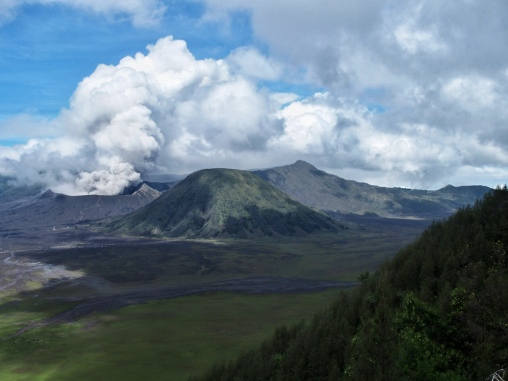 One of the many stairways 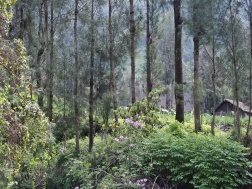 Village and farms on the hike to Seruni Point

We arranged to take the touristy sunrise jeep tour which includes a drive to Mt. Penanjakan to catch the sunset, a stop at Bromo to climb up to the crater lip, a walk across the Sand Sea, and a tour of the backside of Bromo. Alternatively, you can hike the whole thing and make a day of it like the backpackers all did.

We got up at the ungodly hour of 2am to join the stream of jeeps racing away from the town to get to sunrise point first. We weren’t able to get to the top of the point as it was already full by the time we got there, so we went to another viewing platform with no less spectacular views. 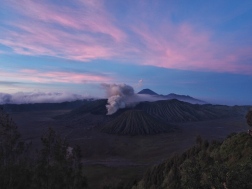 Check out the hat

Bromo from moonlight to sunrise

After the sunrise, it was another race down the mountain to get to Bromo.  Our driver had mad driving skills as he had to maneuver the jeep out of very tight spots since there were many jeeps blocking his way.

At the crater floor,  it was a very lively scene with jeeps coming and going, Tengger horsemen riding around offering rides to visitors who weren’t up for or fit enough to walk to the top of Bromo and hawkers selling snacks, cheap souvenirs, and brightly colored dried flowers to chuck into the steamy abyss as an offering to the gods.

The walk started out on the flat Sand Sea but once we reached the base of Bromo it was a pretty steep and somewhat strenuous climb from there.  This is where the horses have the advantage as the riders trotted beside us looking pleased with themselves while we huffed and puffed up the climb.

After the climb you have to negotiate an additional 249 stairs to get to the crater rim and a view of the inside of the crater while the mountain belched white steam from deep within it’s belly. 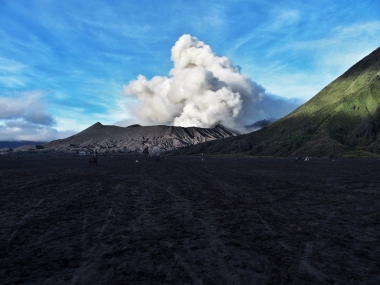 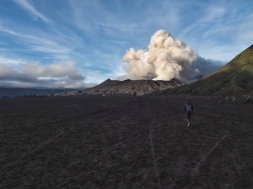 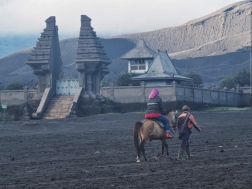 The Sand Sea and its horsemen 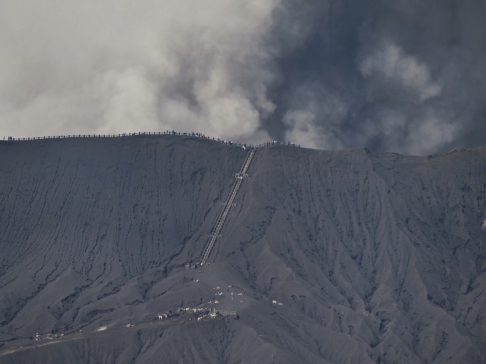 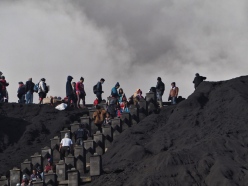 The climb up Bromo and sacrificial flowers

Finally, we made a quick trip to the savannah on the back side of Bromo. It was intensely green unlike the ash wasteland of the Sand Sea. The driver pointed out that the green hill in the foreground is known as Teletubbie hill because it looks like a hill on the kids show. We really didn’t see the similarity, but there was a giant flaming baby head laughing down at us. 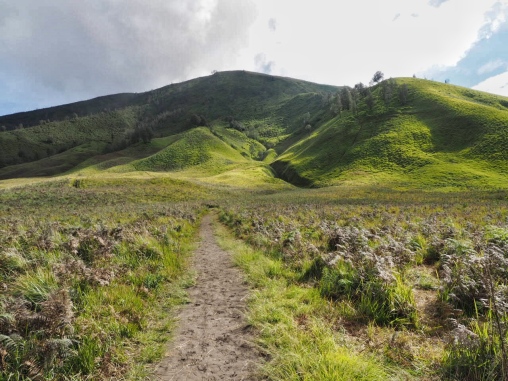 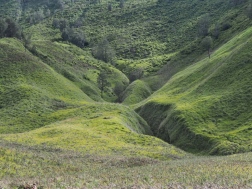 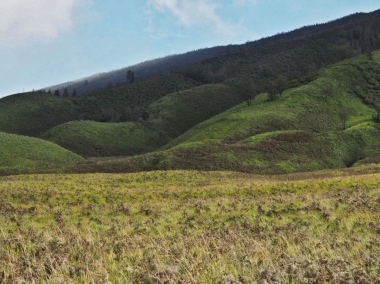 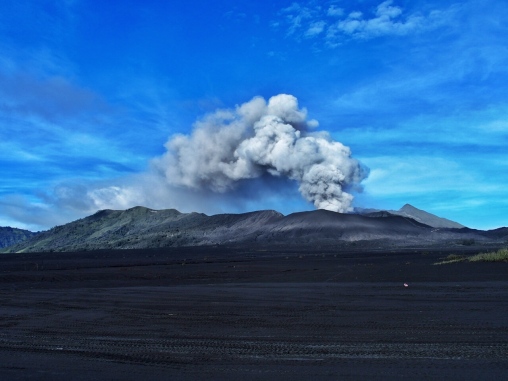 We were back at the Cafe Lava Hostel by 9am where we had breakfast, checked out, and boarded a mini-bus to begin our next nightmare trip. Write up to follow.

One thought on “Reactive Bromo”